Darkest Dungeon is one of my favorite go to games, I drop in and play the game frantically every few weeks trying to get further and further in the brutal world it envisions.  When the Crimson Court DLC was released I had to dive in and see what the developer Red Hook had up their sleeves, knowing it was going to be difficult and hopefully as addictive as the main game.  Having played through quite a large amount of the Crimson Court content I am further convinced the team at Red Hook are maniacal geniuses as they have added content that is even more punishing then the original material yet still oddly fun and addicting. 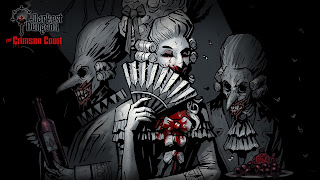 The developer added the Crimson Court as a layer to the Darkest Dungeon, one of the really cool things is that you can choose what bits of content you want instead of implementing the whole DLC.  Only want the expansion options for the settlement?  Or just the new Flagellant character?  Perhaps just the extra dungeons and town events? All these are options you can tick off in the main menu before you start the game. Regardless the content is in addition to the Darkest Dungeon experience, instead of a separate area you explore. 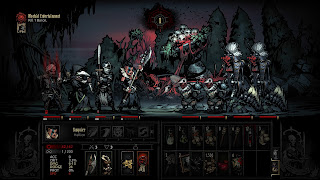 The material does not introduce itself right away, except when blood vials drop, which are essential to the additional content experience.  Instead the new Flagellant character, more on him later, is introduced randomly as you click on the wagon after each foray.  The extra dungeons also appear after you have explored a few times in the intro scenarios and that is when it truly gets interesting.  A plague of insects hit town suddenly reducing the effectiveness of stress relieving activities.  This is a big deal as the Hamlet is the only safe spot you have and now that is compromised.  A newly revealed dungeon called the Courtyard seems to hold the answers to solving the insects and it was labelled short so I headed in with low level characters and faced a challenge I could not beat.  Feel free to check out my fresh gameplay stream that shows some of the content.
The developer has since patched the game and the new area clearly states it is not a newbie mission, but I ran through it prior to that (and a few times since) and saw some of the tweaks from the new content.  First off there is no light meter, meaning torches do not raise your light and ward off bad effects, there is no light and you are always inducing stress due to the cursed area.  Torches give you a buff, but do not mitigate the dark.  There is a mechanic called Bloodlight that stresses the characters as you travel, some monsters add to the Bloodlight level if they hit you increasing the stress you gain; it is a cruel spiral that punishes you as you proceed.  There are also monsters that can infect you with the Crimson Curse which makes you need constant blood supplies.  These were tough to come by but now drop more frequently and Red Hook will be adding a new ‘Gather the Blood’ quest which will give a steady supply. 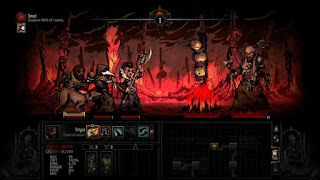 The Crimson Curse is the most brutal of the additions closely followed by the increased stress Bloodlight hands out.  The Crimson Curse cannot be cured (outside of special drops from a boss in the Crimson Court dungeon) and can be spread in the hamlet.  It is nefarious and adds a frantic dynamic to the game that further amps up the tension as well as strategy needed just to survive.  The added stress is a huge problem because until the insects are banished the tavern and abbey will not relieve as much stress as before giving you a roster of perpetually fragile characters.
The new character the Flagellant is a weird, weak yet nearly invulnerable character that adds a new way to play through these brutal dungeons.  The Flagellant has very little health, but that is actually good because he gets stronger the closer he is to death and he has an insane deaths door resistance stat so as long as he can be restored to 1 HP at least in between attacks he will typically never die and deal more and more damage. Playing him requires sacrificing yourself in favor of the other characters (hence the name) so you can stay strong as you are close to death.   A great character that takes some strategy to play but can keep your party venturing deeper and deeper into the Courtyard and other dungeons. 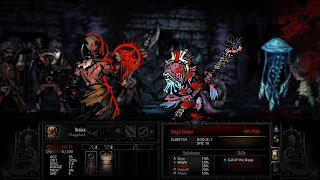 Other interesting additions is that the Courtyard does not start out fully mapped; you have no idea how big (and it is BIG) the map is.  As you explore more paths and rooms get revealed which was a nail biting experience as I was teetering on my last legs of health and sanity.  The DLC also adds some new building options called Districts which are end game builds due to their sheer cost.

They are worth exploring as they add class specific improvements as well as tweaks like more torches, gold, and other bonuses.  It is a nice addition that makes grinding to level and improve characters more worthwhile as you can take your spoils and further upgrade the Hamlet and district buildings.

The Crimson Court is a worthy addition to Darkest Dungeon as it continues the brutally hard but very satisfying ebb and flow of the gameplay and simulation with its added content and scenarios.  The new creatures, characters, environments and bosses are as lovingly (and creepily) represented on screen as the original content. The art style of this game is truly stunning and while the animation is simply the sheer beauty of everything is a sight to behold.  The Crimson Court is at a point that experienced Darkest Dungeon players will face a withering challenge as they attempt to plunge the depths of the content, but Red Hook is constantly tweaking and adding to the experience as a living project and I recommend any fans of the original game explore this new content, but take it slow and careful or you may fall as I did.