I literally saw dozens of games at PAX East this year but the one I have thought most about is No Straight Roads from Final Fantasy XV‘s lead game designer Wan Hazmer & Street Fighter V’s concept artist Daim Dziauddin’s new studio Metronomik. 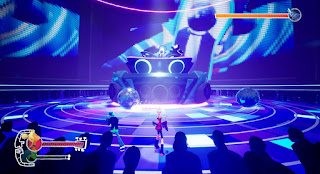 This game is a little hard to describe but it is a crazy colorful, fast paced, frenetic action adventure game with audio as the key focus. The two characters, Mayday and Zuke battle through environments using music to transform items into weapons and anticipate the enemies by listening to the beats of the audio in game.

The story of No Straight Roads is out there as well in all the best ways.  Mayday and Zuke want to fight the tyranny of an EDM label that has taken control of Vinyl City and banned all other types of music.  They battle to bring free music of all types to the people. 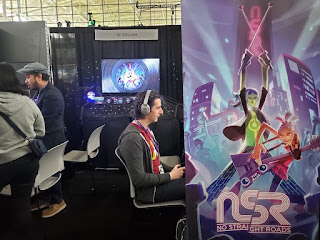 I had a chance to sit with the development team and try two different stages of the game each featuring vastly different bosses and level designs.  I have to say I was incredibly impressed with the game and I have not even seen any of the progression, customization or true depth of the title.

The characters are wacky and original, the music is infectious and really adds to the depth of the gameplay and the visuals are simply striking.  Metronomik has really established a strong visual look and feel with this title that really stands out when you see it in action.

The gameplay itself is quite fun as each of the characters has a different effect when they use their music.  They also have normal physical attacks and can fire ranged blasts when music notes are collected. The key though is listening to the audio, it often cues when attacks are about to strike.

Really though the key to this game is the unique style and vibe that just oozes out of No Straight Roads.  I played both demo levels and wanted more right away. In speaking to Wan Hazmer from Metronomik they are incredibly excited to show more and bring this game to as many people as possible.

He let me know that these demos show just a taste of the full game, there will be customization options, plenty more bosses and a co-op mode so two people can take the fight to the EDM enemies.  No Straight Roads is due out later this year for PC and Playstation 4 and I can’t wait to dive back into this great looking game.