I found myself losing a bit of steam on the third day of PAX East but once I hit the show floor I got re-energized at the thought of seeing more great games.  Among other titles I had a chance to check out two very different games – the retro shooter Wrath and a space building game called Astroneer. 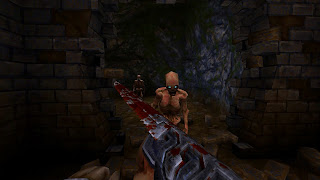 Leveraging the original Quake engine, yes the engine from 1996, 3D Realms and 1C Entertainment in collaboration with developer KillPixel are hoping to tickle our nostalgic bones with Wrath: Aeon of Ruin.

First off this game is terrifically fun and fast which I was not quite expecting. Feeling like a merge of Quake and Hexen this shooter gave me supernatural and traditional weapons and set me loose in a fantasy landscape. 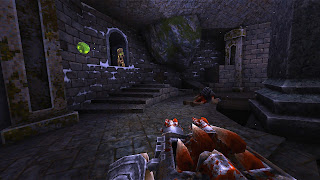 Skeletons, monsters and other crazy enemies pop out from everywhere as I ran through the levels shooting everything in sight and upgrading my weapons.  There are a number of skills as well that either get triggered or stay active. Some skills heal, others make mid level respawn points.

The game was really quite fun with some great non-linear exploration that seemed to offer a lot of options once the full game is released.  Wrath is releasing this summer for PC and Nintendo Switch platforms.

I had a chance to try out Astroneer at PAX East which just recently left early Access on Steam and Xbox with a 1.0 release.  This is an incredibly charming and accessible space themed exploration, building and strategy title that is continually evolving. 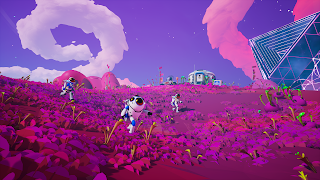 In Astroneer the fully customizable character lands on one of the seven explorable planets, builds facilities, mines resources, terraforms and explores to progress to other regions. There are abandoned structures on each planet that weaves a narrative as the planet is explored.

The developer System Era Softworks showed off a new major feature at PAX East which is jetpacks for the characters.  This adds a lot of fun and further strategy as the pack needs oxygen to boost and that is a precious resource. 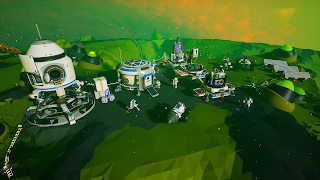 I played around on the demo units and was able to quickly create base items, gather resources, setup oxygen paths and terraform the planet. Astroneer is incredibly charming with a visual style that is as charming as it is practical.

While the game is in a full release level the team will continue to support it as if it was still early access adding features and community requested items as soon as they are able.  They see Astroneer as a continually evolving product.

One cool thing I noted is that both children and adults were enraptured with the game.  It is easy to pick up and really fun to play and explore in. The booth was always full with gamers of all ages which made the team really happy.