For the third year running Bethesda hosted a two-day event running from 1-9PM on Friday and Saturday during the PAX East conference. They take over the two main bars at the Westin Hotel attached to the Boston Convention & Exhibition Center and transform it to a paradise dedicated to all their main games. 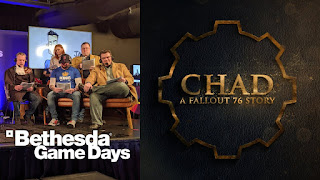 Admittance is free to all, no PAX East ticket needed, and it is a fantastic event. There is always a big line to get in but once admitted everyone gets a free t-shirt, meal, and two drinks. Themed drinks are available at the event, split across the Doom and Fallout motifs. Fancy a Red Mancubus, or perhaps a Brahmin Milk? They had us covered, and the food was also delicious and in great supply, keeping everyone well fed.

The event was a smorgasbord of gaming goodness, with a ton of stations offering a look at the beginning of Doom Eternal and Wasteland 76’s new Wastelanders mode. There were also plenty of panels and gameplay moments keeping everyone entertained.
As well, Bethesda was offering giveaways and some limited-edition goodies everyone could get their hands on. I attended on both days, tried the games, ate some food, had a few drinks, and enjoyed the panels and general camaraderie amongst my fellow gamers.
Doom Eternal 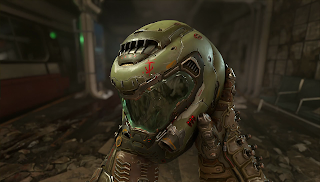 Someone asked me what I thought of the game, and my answer was simple: It’s like Doom 2016 drank a case of Red Bull, snorted a line of sugar, and did 100 jumping jacks. The game is that intense and fast-paced, never really letting up until a level ends.

That may sound questionable but let me tell you it was fantastic. The game looks amazing (no surprise), plays fast and furious, and adds an almost dance-like cadence to the previous title. There is a real rhythm that can be established as you shoot, move, glory kill, swap weapons, shoot, chainsaw, and then shoot some more. 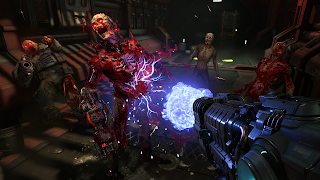 The controls are as tight as can be, the enemies are varied and at times truly creepy, and the story is both bonkers and engaging. The starting cutscene continues the badass legend status of the Doom Guy (or Slayer as the game calls him) and establishes the sad state of the world after the last game. The tag line for the game is ‘The only thing they fear…is you’ and the game really pushes that, making the Doom Slayer a boogeyman to the enemies.

The weapons are more customizable, the enemies tougher, the maps fantastically engineered, and the overall game just feels great. The audio, graphics and controls all work together to make the experience feel just plain right.
Doom Eternal launched March 20 across Steam, Bethesda.net, Xbox One, and PS4. It was universally praised as an excellent successor to 2016’s Doom.
Fallout 76 – The Wastelanders 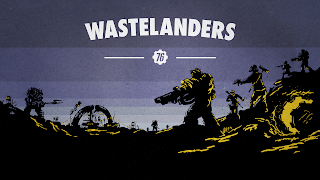 The launch of Fallout 76 has been troubled since day one but no one can deny that Bethesda has been pouring effort into the game to make it meet players’ expectations. Much like the originally maligned Elder Scrolls Online it shows that effort, care, community outreach, and much-needed content can reinvigorate a game that launched with a thud.

In the case of Fallout 76 many aspects have been updated over the last year, but the biggest and loudest complaint was the lack of true NPCs in the game, and the Wastelanders update takes care of this. The update focuses on a large group of Raiders and Settlers who have entered Appalachia in the year since the fault opened.
Time has passed, and Bethesda took great care to show new areas, shifted locations, and adjustments to the original quest lines. I had a chance to play the content for a short time and I came away more impressed than I expected to be. 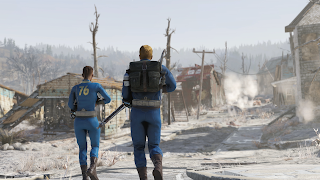 Some new settlers right outside the vault immediately engaged me to discuss a treasure supposedly in the vault. This starts a storyline requiring many quest steps and a bunch of locales to visit. Right off the bat this felt like the Fallout we know and love.

They do heavily incorporate the building/crafting aspects that are the key focus of Fallout 76, which people may still have mixed feelings about. Despite that, the few new characters I met in a short while were interesting and varied, including a tough-as-nails bar owner named Duchess and a ghoul that has a plan to get ahead in the world of Appalachia.
There are new blueprints, weapons, environments, enemies, and characters featured in this update ,and best of all it will be FREE to every owner of Fallout 76 when it launched April 7. It’s obvious this took a huge effort, and the fact that Bethesda is giving this content to everyone in an effort to redeem the game is extraordinary. Yes, they should have launched this way from the start, but this is a welcome addition to a flawed game.
I have been playing Wastelanders since launch and it is a welcome shot to the arm of Fallout 76.  It is still far from perfect and the ecosystem is not quite organically melded with the new NPC’s but it adds life to the originally flawed Fallout 76 experience.