I am in the midst of many games right now, some nostalgic (Temple of Elemental Evil), some average (Afro Samurai), some incredibly shitty (Quantum Theory) and one that is completely blowing me away – Enslaved: Odyssey to the West.

This game is from the talented folks at Ninja Theory who made the ahead of it’s time Heavenly Sword. Heavenly Sword was beautiful, had some of the best motion capture and voice acting this side of Uncharted but had framerate and pacing issues that ultimately stalled it and held it back from a blockbuster. It was also really, really short and seemed designed as a rental game.

Enslaved on the other hand shows the maturity of the developer and they bring in many of their strengths from Heavenly sword and few of the weaknesses. It is a true single player game and it features a pair of incredibly real, likeable and human characters in the form of Trip and Monkey. They are both escapees from a slaver ship, but Trip wakes up first and slaps a slave band on Monkey. She doesn’t do this because she is evil or a weak female character, she does this because she is a realist.

The setting is 200 years after the end of the world, the cities and former populated areas are being reclaimed by nature and are overgrown wastelands. Mechs wander the land and are controlled by a group and used as slavers. Trip is strong, smart and capable but she is aware that she cannot travel home on her own. She just cannot handle the mechs one on one and cannot be sure she can always hide from them. Monkey however proved he can defeat these creatures and Trip needs him. She hates that she has to trap him into helping her, but she does it to survive.

Monkey does not want to be trapped or be Enslaved again, but there is a side to him that reluctantly at first and then more naturally lends a protective feeling for Trip. As the game progresses you can tell he has feelings for her and want sto actually help her. He is a good person and while he would rather be alone he also craves her company and wants to help her.

How do I know all this? Subtle looks between the characters, their body language, the way they speak to each other and how those nuances change. Teh way she leans into Monkey on his bike or the way he touches her when he is concerned. The gameplay itself has one or two really great hooks, but it is very much like Uncharted (not a bad thing at all), the real star is the feeling of character and life they have managed to inject into this game. There are subtle eye glances in this game that convey as much as a glance from Michael C Hall in Dexter or Kevin Spacey as Keyser Soze do in their roles. 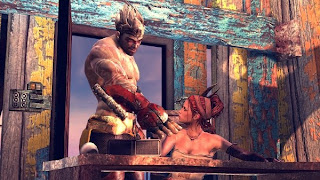 Ninja Theory built a studio and motion capture environment when creating Heavenly Sword and formed a partnership with the chameleon Andy Sirkis. Sirkis oversees the motion capture and acting sequences and places the part of Monkey as well. His talents combined with the truly spectacular writing and art direction make this ‘game’ more like an incredibly fun and engaging interactive movie.

Enslaved is not a perfect game, it has framerate dips, drawin inherent to the Unreal Engine and uneven textures at times, but with an experience and story like it has all those aspects are irelevant. One of the best games of the generation and a sure classic. Play it as soon as you can.