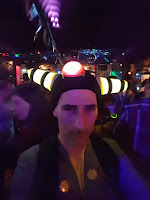 This is the final instalment of my look back at the PAX East 2016 conference and the articles I wrote there.  As mentioned in the previous posts this convention is not straight videogames and it is certainly not about marketing speak.  There are real chances to speak directly to developers, I had some great chats with the creators of Battleborn, We Happy Few and Fated to name just a few.  The show is always terrific and the atmosphere in Boston is incredibly welcoming.

There are always a number of after events to attend and this year and I was lucky enough to attend a few of them.  I always show up for the annual alchohol infused but charity driven PokeCrawl and this year I also attended a social with the Fated developers, headed to a Hitman party and then had late night drinks in the suite of a middleware developer and his friends that I met at the party.  The point is that PAX East inherently brings out a great, friendly and inclusive crowd and I can’t wait for next years event.

As a long time fan of adventure games (mostly rooted in classic Lucasarts titles) I was more than a little excited to check out Thimbleweed Park from Lucasarts alumni Ron Gilbert and Gary Winnick at PAX East.  What made the experience even better was having a chance to chat about the game with Mr. Gilbert directly at the show.  Thimbleweed Park is a refreshing throwback to an older generation of adventure games that feels modern while still retaining the look and feel of the classic titles.

At PAX East there was a relatively small slice of gameplay available to try but it introduced me to three of the main characters from the upcoming title.  The first two are FBI agents Ray and Reyes who at first glance have a very Mulder and Scully from the X-Files vibe that I asked Ron about.  He told me that when they initially developed the characters they wanted to have two agents who meet for the first time in game and have some conflicts that added narrative to the characters.  He mentioned that similarities to the X-Files heroes was unintended but noticeable now, they may look like the characters from the Television series, but they act quite differently.  The demo did not give me much room to get to know them but it did teach the first hints of character switching and transferring items to get the initial simple puzzle, taking a picture of a corpse, completed.

Read the rest of the Thimbleweed Park Preview on Blogcritics.org

In the gaming industry there are few people as unapologetically authentic as Suda 51 from GrassHopper Manufacture and at PAX East I was able to meet him and try his new game Let it Die. The game itself surprised me with how much I enjoyed it because it will be a Free-to-Play title and that usually ends my interest pretty quickly.  Let it Die has all the hallmarks of a Suda 51 game, crazy characters, over the top scenarios, and shocking visuals, and in the end I could not help but enjoy myself playing it, the fact that Suda was next to me reacting as I played didn’t hurt the experience at all either.

Suda was on hand when I checked out the title and, with the help of a translator, I learned that the world of Let it Die is one formed after an apocalypse event has occurred and all of the surviving people are in a sprawling tower.  It is a brutal existence Suda told me so everyone is out to get you and each other so you have to kill to survive and let it all die as the game title suggests.  The game is a third person survival action title and as the demo booted up I was greeted with a character only outfitted in a dirty pair of underwear.  I smiled and noted to Suda and the translator that it now feels like  a Grasshopper game; I am running around almost naked.  They laughed and Suda let me know that I would soon find some gear and weapons. I also asked if I would be able to customise characters in the full release and they assured me that many customisation options would be available so the character represents what you want on the screen.

Read the rest of the Let it Die Preview on Blogcritics.org