Dropmix is the latest creation from legendary music game developer Harmonix and I think after playing it for an extended period it may be their best yet.  The game has been out for sometime and is a collaboration between Hasbro and Harmonix to create a card based music mixing game that is technological insane to witness. 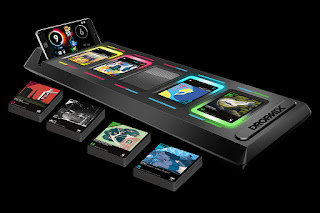 For those unfamiliar with Dropmix it revolves around a 5 slot game board, the Dropmix app on your phone/PC/Tablet and stacks of cards featuring music across all major genres and artists.  The core concept of the game has you dropping cards onto the game board and the game automatically starts playing samples from the card depending on what kink of attribute it has.  If you drop Sia’s Chandelier in the vocal square her vocals start playing, but drop it in the keyboard square and the music plays instead. This allows you to make musical combinations that are genuinely complete unique and oftentimes completely fantastic.  You may have Ed Sheeran’s Sing mixed with LMFAO’s Sexy and I know it with Bruno Mars 24K Magic and Europe’s The Final Countdown thrown in for good measure making a song you never expected.   The game is intelligent enough the dynamically adjust the tempo of all the cards to the first cards original tempo which slows down or speeds up songs in cool ways.

Recent updates to the software have added many new ways to customize the mixes as well.  You can now dynamically increase or decrease volumes of the samples if you want to accentuate aspects of the mix.  Dropmix has always been about sharing the mixes with instant abilities to share a link or save your mixes directly but a new feature lets you choose to record a full-length mix and export at a higher resolution.  Once the mixes are saved they can be uploaded to social media to share. Dropmix has a number of game modes to choose from such as Freestyle where anything goes, Party mode which has prompts pop up requesting certain types of samples and Clash which is a competitive mode.   Recently updates have been rolled out for some of the modes based directly on community feedback.

Party mode now has a higher difficulty mode for faster play and scores as well as a high score list to challeneg and re-challenge friends.  Clash now has an optional turn timer to force quicker mix decisions as battles roll out.  In speaking to Harmonix and Hasbro it was great to hear how they really listen to the community for both new song and feature requests.

The game has been out for a while so there are tons of core cards and expansion packs to choose from but as an electronica/dance fan I was excited to hear that a Chiller pack is coming out in May that will add songs from The Chainsmokers, Afrojack, Odesza and more to the lineup.  These cards were at the DJ station I tried the game at and were really cool to add to the mixes.  They also often release promo cards, at PAX East they have a card featuring music from Supergiant’s recent game Pyre as well as the G.I. Joe theme song.

Dropmix is an incredibly cool idea that the teams at Hasbro and Harmonix are infectiously proud.  It is obvious in the technology, song choices and design of the game that the team hit on an idea that is truly innovative and a hell of a lot of fun.  Dropmix is constantly evolving and is well worth checking out to play at home alone for some great freeplay fun or with friends and family.