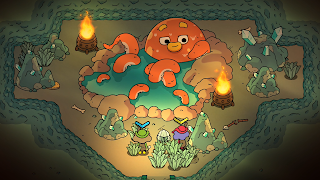 PAX East has become a bastion of Indie titles and like major AAA games they are always a mixed bag, but sometimes a true gem stands out and so far that game for me is The Swords of Ditto.  This game from developer onebitbeyond and publisher Devolver Digital is a game that initially looks like a simple Zelda clone but is so much more. 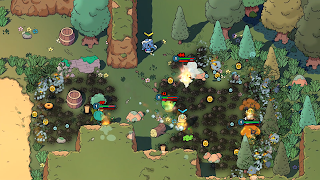 The story of The Swords of Ditto is the truly cool and original part of the game.  The game starts with a randomly generated character (any race, sex and even robots are are on the table) discovering that they are the Sword of Ditto, a legendary warrior destined to defeat the evil Mormo or die trying.

This setup sends the character on a quest to power up a bit before facing Mormo, if you die the world speeds ahead 100 years and Mormo has darkened the land.  If you win and defeat her she is dormant and peace reigns.  Regardless the adventure starts again with a descendant and a new random Sword of Ditto.

This general theme is the core of the game and all the mechanics revolve around this.  Random worlds are generated each time with random side quests from townsfolk as you try to keep Mormo banished or defeat her again.  The worlds are populated and vibrant and the NPC’s always have hilarious comments and stories to share. The bright, vibrant world reminds me of Stephen Universe or Adventure Time and that is a really good thing! 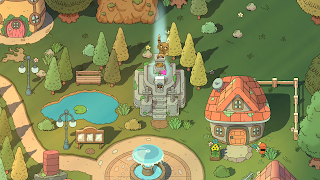 The design of The Swords of Ditto is to be a compact action RPG that changes each play through but there are plenty of deep mechanics to discover.  You can collect and equip stickers to boost up your hero and add perks to their gear as well as equip many different weapons.  Some are traditional like a bow or bombs, but other crazy weapons are a giant monster foot or drone.  The game is not afraid to get wacky and oozes charm while doing it. 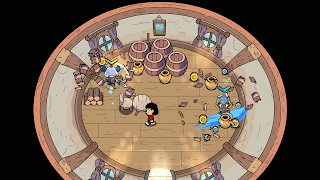 From a gameplay perspective the action is silky smooth, fast and even features drop in/drop out co-op if you have a friend over.  All missions and dungeons can be completed solo, but adding a friend makes it extra fun to travel through the world of Ditto.  The game as mentioned is stunning with animation that is a treat to watch and in speaking to the developer it was mainly done by one artist who created hoards of tools and animations the engine pulls from.

The Swords of Ditto is out April 24th on PS4 and PC Steam is a game worth checking out for the original concept, hilarious scenarios and just plain fun gameplay.