Antigraviator from Cybernetic Walrus is an independently created high-speed futuristic racer in the style of Wipeout. It uses the Unity engine, and from a technology perspective the game is absolutely outstanding, with truly amazing speeds and pace. Unfortunately, the overall game lacks the magic of the Wipeout series, and ends up delivering an average experience wrapped in an impressive technological package. 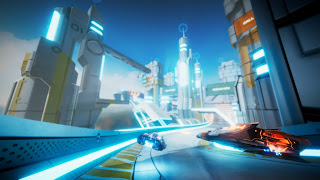 Antigraviator is meant to deliver an incredibly fast racing experience, and the developer delivers on that front in spades. The hover vehicles, called Gravs, have no speed limit, so if you maneuver over the tracks cleanly enough using the airbrake and barrel rolls the speed is actually pretty intense. The tracks themselves are imaginatively designed with loops, inversions, crazy drops, shortcuts, and alternate paths.  This provides a great playground to race in, and some tweaks in the form of traps add a layer of light strategy.

Instead of weapons found in many other racers like this, Antigraviator  offers traps that can be triggered or avoided as races progress. When an icon pops up indicating a trap is nearby, a quick button press triggers it and shields your racer temporarily. The traps cause various effects on the Gravs – hover mines, rock slides, rockets. The traps are an interesting idea, but offer only a minimal strategic element, as opposed to what a well-timed weapon can do. 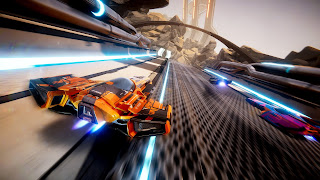 The CPU competitors you race against are competent but very easy to beat if you take care. On top of the traps there are boost pads and a barrel roll that can turn the tide if well timed, as well as alternate paths to choose.

Running through a race is flashy and fast. But ultimately I did not find any truly challenging runs in any of the 16 tracks on offer. The traps offer some variables but never seemed to make or break a particular run. Generally just hitting the boosts as much as possible would guarantee a win.

As I was playing through the game’s various modes and customizing my Grav, I struggled to get engaged. There is a campaign mode, essentially racing through 15 tracks spread through five different worlds. Running through the campaign unlocks new parts, ships, and skins, which was nice but failed to truly interest me. There is a split-screen four-player coop which I tried at PAX East and locally, and it was quite fun. There is also an online multiplayer mode that is relatively smooth, but the ecosystem is sparse with players. In the end, while the game is technologically wonderful, it lacks any real charm, and that is why it failed to hook me. 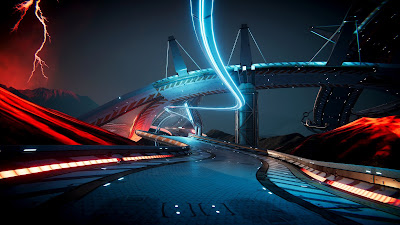 I thought about why that is and figured it out: Antigraviator lacks the design aesthetics, both visual and musical, of games like Wipeout. The ships are futuristic but somehow incredibly generic, and the music is even more forgettable. Back in the day the Wipeout team had a professional design group create the ships and teams and top EDM acts perform the music. The resulting package was truly magical and Antigraviator simply does not have that same appeal.

As it stands Antigraviator is simply a technologically amazing product that is ultimately forgettable. It is a shame as there is a lot done right in this game and it is truly amazing what developer Cybernetic Walrus has managed to wring out of the Unity engine. Hopefully they can take what they were able to achieve and create future products with more personality to create a standout experience.