The Far Cry games have always intrigued, entertained and annoyed me all at once.  The gameplay is always tight and varied but often falls into repetitive and meandering patterns with a smattering of great story moments.  Far Cry New Dawn has all of these same characteristics, but all the pieces finally fell together in a way I truly enjoyed throughout the experience. 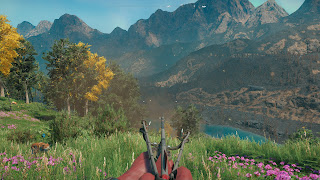 The premise of New Dawn follows the end of Far Cry 5 which had Hope County devastated by a nuclear blast.  The entire country (and potentially) world has been affected by a nuclear exchange and the people of Hope County hid in bunkers and emerged to rebuild.  Forgetting real world science and assuming the radioactive fallout would not kill everyone.

The action picks up 17 years after Far Cry 5 and my character entered the remains of Hope County in a train as part of an aid caravan.  This world, now post apocalypse, is not the barren landscapes of a Mad Max or Fallout mythos, but instead vibrant, colorful and frankly beautiful.  The train is attacked by the new villains, twin sisters Mickey and Lou, leading a faction called the Highwaymen and my character is left to save the day as per usual. 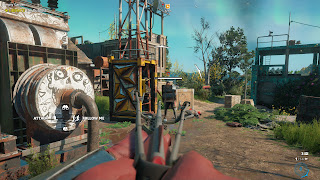 What is not standard is the delineation between good and evil.  In many of these games like Far Cry, Uncharted and Call of Duty you are in the role of the ‘good guys’ but many hundreds of people die at your hand.  This is often explained by opposing truly evil people as demonstrated by their in game actions.  In Far Cry New Dawn that line is much grayer.

Like the Highwaymen my core focus is expansion, gaining resources and protecting my people.  Like the Highwaymen I only recruit people who can help my cause, there is literally no way to bring randoms into my base outside of the key personnel who can make a difference.  Much like the ‘heroes’ of the Walking Dead sometimes both sides do horrible things. Now the twins show their ‘villain’ card a number of times in various fairly heavy handed ways. This makes it is easier to justify my somewhat mirrored actions to eliminate them and their people from taking advantage of the survivors in Hope County but that contrast is certainly there.

The reason this game clicked with me is the ridiculousness of the vibrant post-apocalyptic world as well as the re-emergence of Joseph Seed. Later on in the game essentially super powers are introduced that allowed me to truly just enjoy the experience as a fun popcorn flick style narrative.  Similar to how Saints Row IV went (even more) ridiculous with super powers and became the best game in that series. 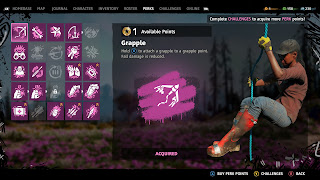 Once I had my teeth into the game I realized once again that the Far Cry mechanics are pretty fantastic.  Stealth weapons rule the roost with bows, the truly epic saw launcher and silenced weapons introduced and used ad nauseam in my playthrough.  The ability to craft weapons, special ammo and vehicles is really cool as well and adds to the variety when running through the world.

The RPG mechanics added or expanded such as skills, the ability to upgrade the home town of Prosperity and treasure hunts are also welcome additions to the series.  Prosperity is an interesting hub where certain portions can be upgraded to allow more crafting, traversal and ability options. 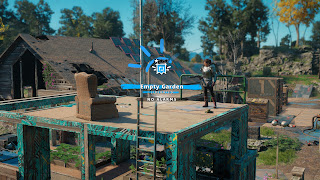 Another great addition to the Far Cry formula is expeditions.  These are essentially out of story raids on beautiful set pieces like aircraft carriers or mining towns that I could trigger by talking to the local pilot and even replay on harder difficulties.  These expeditions rewarded me with valuable resources and frankly were plain fun to experience.

Settlements are another neat aspect of New Dawn and are dotted around the map encountered naturally or tagged on the map by survivors.    Once the settlements are freed they generally rewarded me with plenty of resources (especially the key one Ethanol) and are mini hubs that can be used to launch from.  They can also be ‘scavenged’ which allows the Highwaymen to reclaim the sites so I can take them back again against tougher odds but for higher rewards. 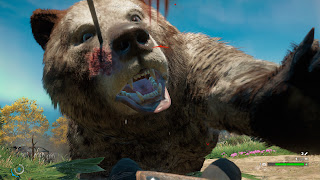 Between the expeditions and settlements there are also Treasure Hunts similar in idea to the Prepper Stashes to Far Cry 5.  These treasure hunts are also queued by the survivors I met but were always accompanied by some truly fun story beats.  Sometimes it was a crazy machine I had to figure out, other times it was following the trail of an unlucky survivor just trying to stash his stuff and dogged by animals and bandits.  They always reward with perk points, far cry currency (which can also be bought with real money) and plenty of resources.

These three side ventures are completely optional (aside from some key story based settlements) but add a truly enjoyable way to grind for resources and abilities in the game.  I hesitate to even use the word grind because I found stealth clearing settlements, battling trough expeditions and discovering the treasure hunts to be really fun. 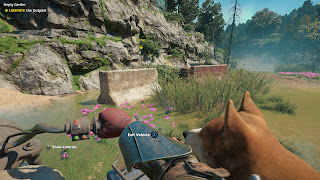 Throughout these side ventures and the main game the core mechanics of Far Cry are pretty fixed. I established footholds in new areas, hunted animals and bad guys, fired a lot of weapons and traversed the map in all sorts of weird and fun ways.

There are a host of companions varying from the truly annoying Hurk and interesting Pastor Jerome to animals like Horatio the wild pig and Timber the dog.  All of the companions level up as they take out enemies with you gaining new abilities. Timber was hard to displace for me as the dog could actually see more and more resources and enemies (even through walls) and flag them to me as he levelled up.  Removed a lot of the annoying searching for resources.  Plus he is so damn cute!

In the end Far Cry New Dawn was a truly enjoyable game for me once I embraced it as a silly popcorn style action experience.  The mechanics are proven and amazing, the new and expanded features are truly fun and they actually made a post apocalyptic world look beautiful and fun to explore.  Far Cry New Dawn is available now on PC, Xbox One and PS4.