After a full first day of PAX East I was tired but exhilarated, the expo hall is so huge I had barely scratched the surface on the first day.  I had a number of scheduled appointments but also saw some games on the fly like The Behemoths remaster of Castle Crashers on PS4 or the classic dance game Space Channel 5 on PSVR.

Day 2 dawned though and I was back on the show floor checking out a wide variety of games and experiences.  From a VR falcon based game to a new large scale version of Earth Defense Force and a supernatural action game set in the ruins of Chernobyl.  All the games were interesting and different experiences. 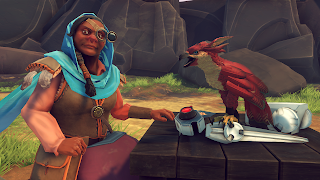 I had a chance to sit with Outerloop Games and have a look at the soon to be released PS4 and PSVR game Falcon Age.  This one is quite cool and unique with the main hook of the game being the titular Falcon the main character Ara works with.

In speaking to the dev they were fascinated with the falconry practice and did a ton of research which led to the concept of this game.  In Falcon Age I played as As Ara where I learn to hunt, gather, and fight to reclaim her cultural legacy in the lost art of falcon hunting against a force of automated colonizers.

The concept looks at colonialism, but from the sides of automated robots that indiscriminately take over planets.  Leveraging her partnership with a Falcon I could name Ara works her way towards freeing her people and bringing back the ancient practice of Falconry which holds significance with her people. 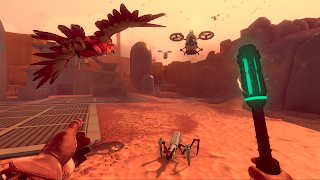 The game is very interesting to control with very easy functions (both in standard and VR modes) to control the Falcon (I called it Petey).  The controls vary from attacking, to roosting, gathering or doing recon.

I could interact with Petey, giving him clothes, food, comforting pets or crazy hats and accessories.  The combat is pretty fun and really required me to coordinate attacks with Petey and keep an eye on his health.

Falcon Age looks great and is a prime example of a VR game done right.  From the ground up the designed it two pronged, VR and Standard. This way they did not have to shoehorn in support for either mode.

The game itself is truly lovely to behold as well and a good addition to the PSVR landscape. Falcon Age launches on April 9th for PlayStation 4 and offers VR support from Day one. 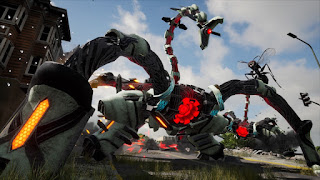 On the crowded show floor I had a chance to swing by one of the larger booths and check out the latest in the Earth Defense Force series – Iron Rain.  This series is bonkers focusing around an elite group of defenders facing off against monsters to defend the earth.

Even though this was a show floor demo I was given plenty of time to customize my character – who is always named Closer and is recovering from a long coma to rejoin the fight. I guess people in the EDF just don’t get a break!

Once my character was ready – including picking weapons and Physical Augmentation Gear (also known as PA Gear) I hit the battlefield running.  Right away I was facing off against building sized ants and crazy alien tentacled creatures so I knew what I was in for. I crazy town action game where anything goes. 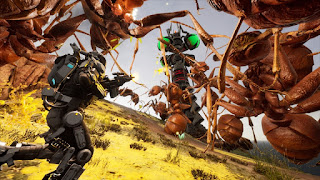 I plowed through the mission and then got back to base where I saw the deeper mechanics.  I was able to customize additional aspects and pick my next missions. There is definitely a narrative thread but a lot of freedom in how the game progresses.  I did not get to try it but Earth Defense Force: Iron Rain will feature 2-player local co-op via split-screen or team-up with fellow players for 1-6 player online co-op.

There will also be a new competitive multiplayer mode called Mercenary Mode, supporting 2-8 players on two teams competing for the most gems collected at the end of each round while defeating enemy hordes and other players at the same time.

Earth Defense Force: Iron Rain looked and played great but is not really my cup of tea.  It was too open for how I like games to progress and the vibe was just too odd for my liking.  I am a lone voice though and the series is widely popular – from what I saw even casual EDF fans will love this when released April 11 for PlayStation 4. 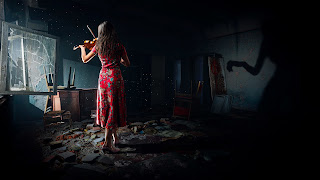 This was a very interesting game from a small developer focused around love and loss at of all places the Chernobyl disaster area.  The game revolves around the lead character who was a young physicist at Chernobyl when the nuclear catastrophe happened April 1985.

His girlfriend at the time disappeared in the event and 30+ years later he is still obsessed with her and I started the game playing as this character searching for answers.  What was most cool about the game is that the team went to Chernobyl numerous times to document, record and take pictures.

This commitment to reality really benefited what I saw of the game.  Areas reclaimed by nature or repurposed by factions in the game all looked stunning as did the overall look and feel of the world created in this game. 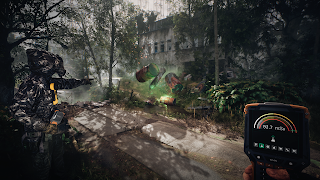 There is a very strong narrative arc in Chernobylite with many sci-fi and supernatural elements.  There are portals to teleport around in the game and to traverse them I had to travel through another dimension where it was hard to separate reality from imagination.

In the real world there are manifestations as well as real enemies to be encountered.  The game is VERY early so enemies looked great but had very poor or basic AI governing their actions but that will be steadily improved.

There is base building, cracting, upgrading and survival elements as well which were cool but i sometimes worry that too many loose threads ruin the product but what I saw was quite capable even at this early stage.

Overall Chernobylite is a gorgeous representation of Chernobyl with some really interesting supernatural and sci-fi hooks.  They are moving to Kickstarter to get additional momentum on the game and I hope they succeed so we get the best version of their creation.