As mentioned PAX East is much more than videogames and community events there is a huge part of the show that is focused around tabletop games. I had a chance to meet with Dire Wolf Digital’s upcoming games Game of Thrones: Oathbreaker and Clank: Upper Management Pack at the show and both were very interesting and a lot of fun.

Dire Wolf could have taken the easy route and made a relatively simple game based on the massively popular Game of Thrones brand but instead they created a deep and interesting game based on loyalty and treachery.

In this 5-8 player game everyone gets a character to start the game and they are all based on the TV series regulars.  One character is named King or Queen and the others are randomly and secretly assigned traitor or loyalist characteristics.

During gameplay challenges are played and each character can help or hinder depending on their preference or role in the game.  These actions are played from each person’s deck and are placed face down and shuffled so no one knows who played each action. 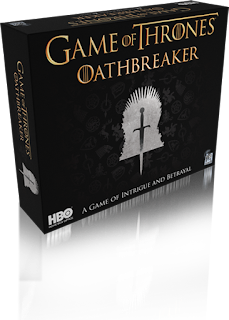 This results in challenges either causing Chaos or order.  If at the end of the game one side has more tokens denoting their favor they win.  There is a twist as each character gets values assigned depending on what they did and if the traitors have a lot of tokens at the end they could shift the win over to the Chaos branch.

In the playthrough I experienced there was a lot of give and take as every player worked for their own betterment and their appropriate role.  It felt very much like the tone of the series which is a very good thing.

The board, tokens and play cards are all very well done and high quality which is always appreciated.  I really enjoyed this game and could see how a lot of strategy and reading the other players is necessary. If I was able to figure out the traitors I could play the system against them and vice versa. Game of Thrones: Oathbreaker is out this spring and can be pre-ordered on the Dire Wolf website.

Another game I checked out was the expansion pack for Clank! featuring the characters from Penny Arcade’s Acquisition Inc. campaigns.  The pack overlays new characters, abilities and tokens onto the existing Clank! ecosystem which was pretty cool.

Clank! is an interesting game to play as it is essentially a dungeon crawl where the goal is to get a valuable artifact and exit the dungeon before the dragon eats everyone.  When certain actions occur there is a ‘clank’ and that triggers the dragon to attack. As more actions occur or artifacts are stolen the dragons attacks get fiercer. 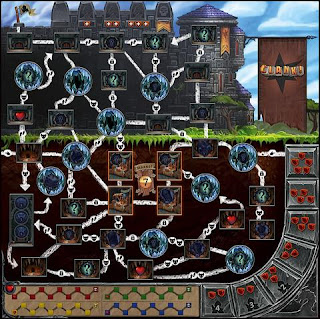 Clank! is a very strategic game as there are abilities that let rooms be skipped or lucky draws that negate damage.  Each character is pretty much acting on their own and trying to claim the most valuable artifact as quickly as possible.

In the playthrough I took part of each player went their own way and at times we tried to even hinder each other.  The only thing we all did collectively was try not to get the dragon’s attention. One of the neat tweaks of the game is that to even collect points we needed to get above a certain depth before the dragon killed us.

This turns the game into a literal race to go as deep as possible and then back up again.  It was really evident that the temptation to go for the most valuable artifact was reckless as there were many chances to alert the dragon on that path.

In the end Clank: Upper Management Pack was great fun and the addition of the Acquisition Inc.characters and ability tweaks adds a lot of charisma to an already fun game.  Tons of fans were interested and Dire Wolf had a pre-sale for the expansion at PAX East far in advance of the fall release date in stores.