I am a hardcore Transformers fan – when I was a kid all I wanted for every special occasion was a new Transformer.  When I found out Hasbro and Wizards of The Coast were showing off the recently released Rise of The Combiners sets at PAX I had to check it out.

The Transformers Trading Card Game has been around for a little while and it is a terrifically fun game.  There are a number of ways to play but at the heart character cards are in play and every round battle cards are drawn which add to your transformers or instigate battle between the players. 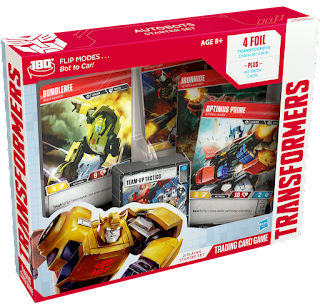 Over the course of the match a Transformer could power up or down and transform between alt and primary mode depending on what the bonuses do in each mode.  The goal is to destroy the other team to win the match.

In quick play mode (which I did for the demo) 2 booster packs are opened and each player puts down their two Transformers. The remaining battle cards are aligned in the middle and played in sequence by each side.  It is a quick battle mode and frankly pretty exciting. 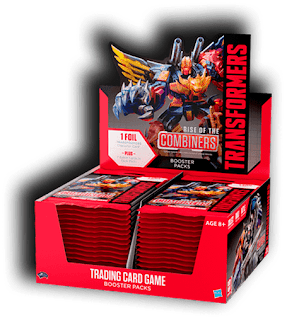 The main game mode is to build a team equally 25 power points (each Transformer has ratings on the card) and a deck of 40 battle cards.  Each side lays out their team and plays through their cards trying to destroy the other side. This is where the Rise of the Combiners expansion really comes into focus.

With the combiners it is possible to find 5 (sometime fewer) Transformers that together equal 25 power but can also combine if the right card is played into a mega construct such as Predaking.  The result is pretty amazing and of course they have some pretty amazing stats. 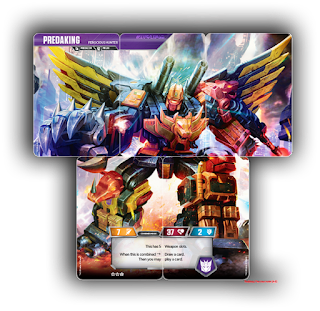 The cards themselves also have a neat attribute, the are double sided AND fold out to form their piece of the combiner. In normal play only alt and vehicle mode is available but if the Enigma card is played all characters fold out and form the Combiner.

There is plenty of ways around these combiners, building a good standard team and deck and playing smart can always work, but they are damn cool to get working.  In my time with the Transformers rep he showed me Predaking and other combiners and I have to say it was pretty amazing to see how they made this work. 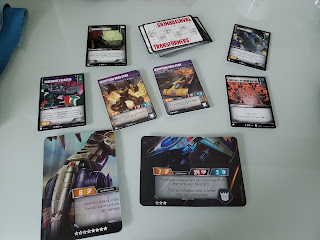 The core game is very fun and visually appealing as Wizards has access to every era of Transformers art through Hasbro. The cards are beautiful and very true to the feel of what these Transformers would have power wise.

Every since the demo I have played this quick booster draft version with friends and family and everyone has had a great time.  Hasbro and WotC have a great thing with the Transformer TCG and the Rise of the Combiners Expansion makes it that much more exciting.  Plus they are regularly rolling out new combiners such as Devastator and others so it will continue to grow in scope.