One of the more pleasant surprises at PAX East was checking out a small but beautiful game called The Riftbreaker.  Made by a Polish group called Exor Studios this game had a lot of tweaks to the base building strategy game formula. 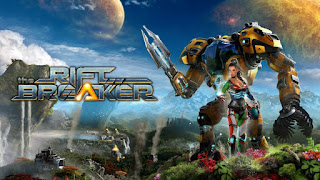 Set on a distant planet called Galatea 37 I played the demo as Captain Ashley S. Nowak an elite Scientist/Commando equipped with a powerful Mecha-Suit.  The task is to create a two-way rift back to Earth which will require extensive base building and resource management.

Armed with the suit I was unleashed in the demo with a small base already established.  The developer told me that the more I expand the more ferocious the local creatures will become as I am encroaching on their planet.  But being trapped on the planet there was no choice but to proceed and build. 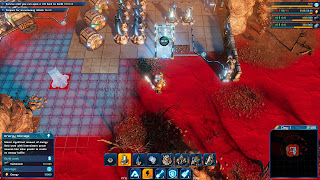 The key aspects to The Riftbreaker are Base Building, exploration, resource gathering, survival and of course combat.  As I explored the area building resource gatherers and solar arrays to power them I face numerous mini hoards of enemies.  The Mecha-suit is equipped with guns, missles and close quarter blades.

I was told that research will play a key part as well enabling ability, base and Mecha-suit upgrades to make progress much smoother. Gathering resources and researching steadily will be the key to success they told me. 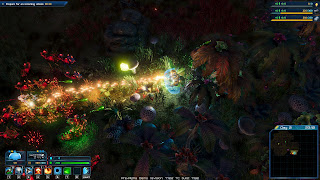 Base building was very cool with very dynamic animations on every building, turret and depot as they are built.  Even the solar arrays rotate and sparkle giving a lot of atmospheric depth to the game. The lush world also reacted to my presence as I walked through with trees and foliage disrupted as I passed through.

The eponymous Rifts also play a cool part in this game.  As I explored areas I was able to create local rifts so I could travel between outposts very easily. As I progressed further through the demo this became essential to adequately build up and then defend my resources.

The demo ended with a huge hoard of monsters attacking my base which I was prepared for by adding a ton of turrets and placing myself on a high point to carpet bomb the creatures.  It was a really nice way to see the scale possible in the game as dozens of creatures were attacking. Felt like a Zerg rush but different enough to be its own thing.

I left very impressed with what I saw of The Riftbreaker and looking forward to see more once it is released sometime this year for PC, PlayStation 4 and Xbox One.