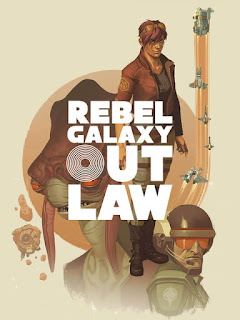 Many games have tried to capture the inexplicable magic of the Wing Commander games and in particular the spinoff Privateer, but with limited success. The new title Rebel Galaxy Outlaw somehow captures the essence of these classic games but wraps it in a super accessible and fun video game experience.

Rebel Galaxy Outlaw, an Epic Games store timed exclusive from developer Double Damage, is at its heart it is an arcade take on a mercenary style space sim. The story revolves around the lead character Juno Markev who is out to avenge her husband’s death. Juno’s ship is trashed after she misses her revenge, so she approaches a friend for a ship and embarks on a series of adventures to find her husband’s killer.

Juno then needs to take on some missions to upgrade her rust bucket of a ship and start earning favors to track the bad guy. These missions are chosen from mission boards and could be patrols, pirate hunts, recon, or cleanup missions. All are easily tracked on screen with yellow icons, and can be navigated to with surprising ease by aiming the reticle to the waypoint and jumping with one button press. 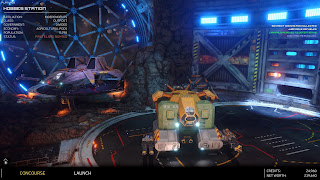 Once at the mission, combat is generally involved, and it is easy and incredibly enjoyable. All ships have multiple weapons and missile hardpoints as well as ECM and tractor
packages that get added as upgrades. When combat is engaged the radar is pretty clear and with a trigger or button an enemy can be targeted, automatically followed, and speed matched. With this assistance firing on and dispatching enemies is fun and fast but still requires plenty of tactics.

Missiles need to be evaded, power needs to be monitored, and lock-ons for ordinance are required. With many enemies, allies, and potentially mines all around, the combat can be frantic and is always fun. Because of how fast the travel and battle are, the grind of completing missions to scale up Juno’s ship is actually enjoyable. 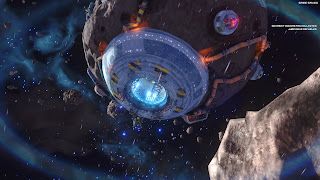 There are so many things to do, from random missions to trading and joining the mercenary or merchant guilds for their specific missions. As you explore, you find many bases have different trading economies, so good cash can be made with a little research. Regardless, the key here is to raise cash to build up your ship then trade it in for bigger and badder versions.

Along with being incredibly fun to play the game oozes atmosphere. Not only are the boot screens on Juno’s ship seemingly ripped from the ’80s, there are plenty of ways to customize her ships. Limited flair can be bought to dress up the cockpit but the entire ship can be painted, with patience, as the game launches to a true paint program.

Check out some gameplay from Rebel Galaxy Outlaw as I try a story mission that is a above my ship’s ability, making me realize a few missions are needed to upgrade my trusty but rusty vessel.

In flight there is a handy menu system to find starbases, missions, cargo storage details, and best of all, radio stations. Yes there is deep space radio and a number of frankly amazing stations to pick from to add tunes while dispatching hordes of space pirates. 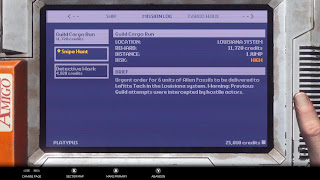 The icing on the cake is a fun if clichéd story complete with full voiceovers. The story will be familiar to anyone who has watched Firefly, Farscape or The Expanse. A rugged anti-hero type (Juno) is just looking for some personal revenge and gets pulled into a bigger issue that she feels compelled to explore. Along the way she meets a bunch of oddball characters, destroys dozens (or hundreds) of enemies and explores the far reaches of known space. 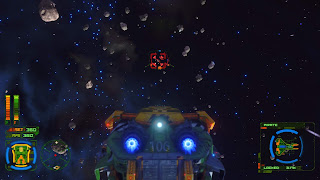 It is not the next great epic, but it is a fun way to keep the action going and enough motivation to keep you interested in the next story tidbit. One note on story progression: There is no real gating, you can go anywhere once a jump drive is bought, but certain encounters need a seriously beefed up ship. This necessitates a fair amount of missions (which are fun) to get your ride in fighting shape.

Frankly I can’t find much wrong with Rebel Galaxy Outlaw.  It looks fantastic and plays super fast with terrific mechanics and customization.  The sheer ease of travel and view shifting is fantastic and truly wonderful to experience. It has charm to spare and is frankly a joy to play. This is the game I did not realize I was waiting 20+ years to play and I can’t wait to get back into space with Juno.