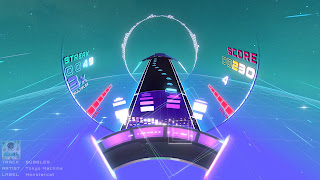 The moment I booted up Spin Rhythm XD I knew it was one of the unicorns of Rhythm games. Simple to pick up but addictive and fun to play. This is a formula that is so hard to master but developer Super Spin Digital nailed it with this release.

The premise of the game is incredibly simple but requires absolute precision to just complete the levels let only get a high score. At the hear of the game there is spinning and clicking or holding the notes as required. That is all, but as the levels flow it becomes hypnotically difficult while remaining fun. 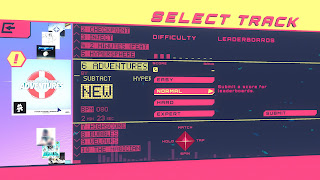 As mentioned spinning is the key mechanic as only two colored notes flash by in the form of blue and red. The main trick is to spin (I found analog sticks on a controller the best way) to align the colors and collect all the beats. At times a fast spin in either direction is also cued usually triggering a sustained beat.

Clicking or holding the single required button when cued onscreen activates a note or beat and as the sequences float by I truly felt like I was controlling the narrative of the music. 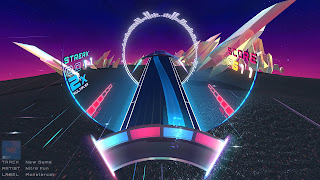 Often in these types of games the inputs feel disconnected from the music but here I actually felt driven by the beats to flow faster and faster through the onscreen action.

Missing enough spins, notes or taps leads to the song falling flat or the level just plain ending. The game is quite forgiving but it became obvious quickly when I could not keep up as the song just collapsed around me.

Have a look at a playthrough of a few levels to see how the songs and actions flow together to create a great experience. I could not help moving while playing the songs – that is a sign of a good time.

The songs themselves are high energy Electronica and feature some amazing artists like Nitro Fun, Tristam, Droptek and many more.  The music is key to a game like this working and the dev curated excellent tracks for Spin Rhythm XD. 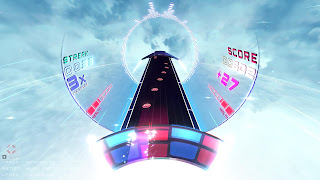 As I was playing through all 15 songs in the game I was actually forced to remember that it is still in early access. The game is already polished, feature complete and incredibly fun. As the developer moves through to a full release I imagine it will just get better and better.

Promising 30+ tracks upon full release on PC and Nintendo Switch in 2020 Spin Rhythm XD is seriously an excellent game. It is not deep, or tells a compelling story but it is fun, addicting and a true pleasure to just play with headphones and just bliss out with the beats.