By far the biggest event for me at PAX East this year was a chance to be one of the first in the world to see the gameplay reveal of the upcoming game Baldur’s Gate 3 from Larian Studios.  The team behind the fantastic Divinity Original Sin 1 and 2 chose to showcase the first look at the game in action at the show and I was able to get an up close look at a developer led playthrough of the amazing looking sequel to the 2001 release of Baldur’s Gate 2.

Yes, 19 years have passed since this universe has been faithfully revisited in a true sequel, a combination of licensing woes, studio closures and care of the venerated property caused this long dry spell.  Having seen the game in action I can easily say the wait will be well worth it! 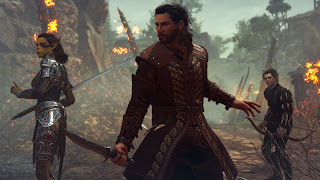 Starting with a truly epic cut scene showing a location hopping battle between the menacing Mind Flayers and their eternal enemies the Githyanki.  The Mind Flayers are the core bad guys of BG3 (as far as we know) and start the game inserting what Larian called tadpools into the eyes of a number of captured people of various races from Faerun.

Their goal is to create more of their race, the creatures inserted into the prisoners will eventually devour them from the inside out and transform them into new Mind Flayers.  The Githyanki damaged the ship holding the prisoners and it eventually crashed which is where the adventure starts. This scene was thrilling, amazingly well done and set the tone for a truly epic adventure. 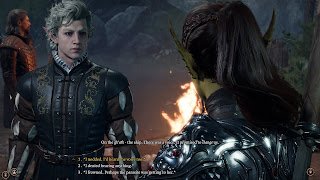 Once the game truly starts there is an option to create a brand new character from a number of races (including drow and half-drow!) or choosing original unique characters created by Larian.  I always love my own characters, but much like Divinity Original Sin 2 the unique characters are just so darn interesting.  There is a Human mage with a dark past, a Githyanki warrior destined for greatness as well as others, but the demo focused on the Elven vampire spawn character named Astarion.

He could have very much been a boring cliché character but little story bits during the hour long demo made him a compelling choice.  Option to hide the fact he is a vampire, the constant pull to his master, the ability (thanks to the Mind Flayer tadpole) to be in sunlight and even a choice to drain companions blood as they sleep are amazing touches. 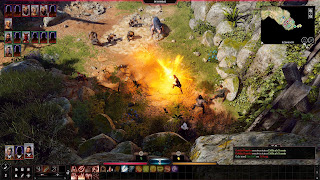 Larian brought Astarion through an intro section meeting the mage Gale and the Githyanki Lae’zel as they regrouped on a mission to find a healer to address the tadpole growing inside them.  The look and feel of this world was frankly astonishing with amazingly detailed characters and animation pulling all of us into the demo.

The Dungeons and Dragons 5E rulesets are in place allowing spells, healing, and special actions as well as melee and ranged attacks.  The developer also brings in Divinity features like environmental effects that spice up the environment and the ability to throw anything within the characters strength profile. 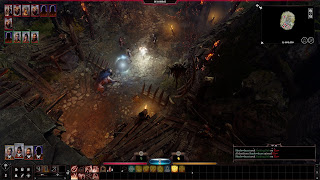 This resulted in combat, which can be real time or turn based with a click of a button, which was incredibly dynamic.  Oil barrels can be destroyed and then the oil or grease set on fire, characters in water can slip and boxes can be stacked and climbed for instant height benefits.

Speaking of interesting combat mechanics when an enemy was down to a single hit point the Larian dev decided to use a free action of throw and threw boots from his inventory at the enemy.  It landed with minimal damage but that was enough to kill the last enemy on the board to laughs and cheers from the people watching the demo. 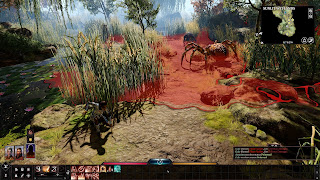 Everything about this build was fantastic from the stunning visuals and animations to the pitch perfect rules representation and tweaks based on the Divinity Original Sin mechanics.  The introduction of Mind Flayers, incredibly enhanced inter-team dynamics and what seems like many moral choices  were icing on the cake. I was already excited about Baldur’s Gate 3 (enough so that I bought the enhanced edition of BG2 recently) but this playthrough made this my most anticipated game of 2020.

They will be releasing Baldur’s Gate 3 in Early Access format starting with 15 races and 8 classes and continuing to evolve the game based on feedback and fan response.  Frankly with a developer like this (much like Supergiant and Hades) early access can be the gift that keeps giving for this title with new features and enhancements coming as the game approaches full release…when it is ready.