It was a pleasure to meet freelance games artist Loukia Kyriakidou at MIGS this year. She was able to sit with me before her chat at the show, entitled “What a Hero Looks Like: An Exploration of Bodily Prejudices in Games,” and share her history, passions and ideas on better representation. 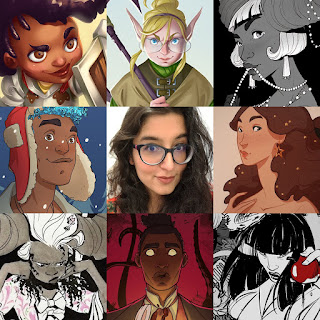 Loukia is a fascinating person with an incredible passion for not only art but gaming in general. Her passion started at a young age as she not only drew nonstop but watched and played games with her family.

Her first main inspiration from gaming was watching her dad, a pretty serious gamer, play Tomb Raider. While today we may look back at the character of Lara Croft as over-sexualized, back then it was simply amazing to Loukia to see a female lead.

Flash forward a number of years, and Loukia went into the gaming world just out of school, and has enjoyed a successful career as a freelancer ever since. A mix of raw talent and great networking has given her a steady flow of projects.

Currently she is proud of a number of her, projects such as PrimeTime Detective, Selling Sunlight and Battletoads. On these she does a lot of the concept art and character development. I found it interesting that she is sometimes given personality descriptions and generates the look and feel from there.

The focus of her talk was about encouraging changing our perspective on what a hero has to look like. It’s proven that people want more diversity in our games, so why are we most likely to see a white male lead on a majority of AA and AAA game releases?

Her wish is that more developers, outside of indie projects that tend to be more inclusive, try to represent more genders and cultures. When I asked what she would do if she were the ruler of the games industry, she answered, let’s try to make games for an entire year where characters are something we have not seen before. Just pause and reset in a different way.

What a concept – imagine E3 2020, and all the games feature people of color, females, disabled and elder characters. That would be a paradigm shift that would rock the gaming industry, and frankly I think it would be great.

She is also very involved in community outreach as a director of the Women Making Games NE group, and ambassador for Women in Games and STEM. She uses these projects to encourage more women to join the videogame industry and inspire others by her example.

It was a privilege and pleasure to chat with Loukia at MIGS. Please have a listen and get a look inside her world and perspective on the videogame industry.