I have dabbled in the Trine franchise in the past but have never really been pulled into the game until the recently released Trine 4: The Nightmare Prince.  My previous experiences never grabbed my attention, but from the start I enjoyed Trine 4’s accessible puzzles, whimsical storytelling, and graphical touches. 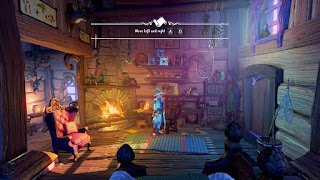 The premise of Trine 4 centres on the aforementioned Prince who dabbled in magic he should not have and went missing.  The three heroes Trine has focused on – Knight, Wizard, and Thief – team up once again to rescue and return the Prince to the magical institute.

From the start the game had my attention as the Wizard Amadeus is introduced just trying to check his mail in a remote location from his hut. The continual commentary on why the mailbox is so hard to reach gave me more than one smile and was a great intro to the tone of the world and style of puzzles. 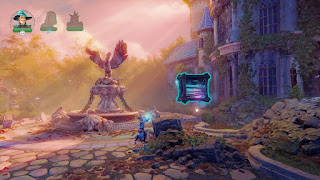 Prologue sequences with the other two characters, Pontius the Knight and Zoya the Thief, demonstrated their distinct personalities and skills needed to progress through the world.  Amadeus can conjure a box and levitate it or other items.  Pontius can slash at things with his sword, deflect light, and projectiles with his shield and butt slam onto levers or delicate environments.  Finally, Zoya can shoot rope arrows to connect items or swing on and shoot arrows to break far away items.

These skills plus some tweaks to their arsenal as the game progresses are key to the truly fun puzzle designs in Trine 4.  There are very few puzzles that stumped me but many that required some thought.  The loveliest part of the puzzle design is how mobile it is with puzzles solved on the go intuitevly once you are on a roll. Often quick switches between characters is needed to adequately get through some sequences, and it is rarely frustrating which is a tough gameplay balance to achieve. 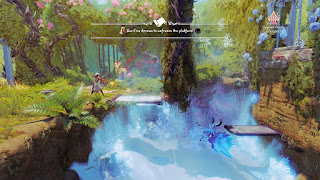 Controls are easy to figure out and exploring the colorful world of Trine 4 is incredibly enjoyable.  Little atmospheric and background touches abound, like creatures scattering or further levels visible in the background.  The game is represented in 2.5D, which is a very good thing as it makes navigation and puzzles more intuitive.

The only real downfall to this game is the combat; it is dull and out of place aside from some of the fun boss battles.  Generally certain areas will get locked off and cloud ramps will appear alongside demonic enemies.  The three heroes of Trine 4 are not all created equally in these combat situations. 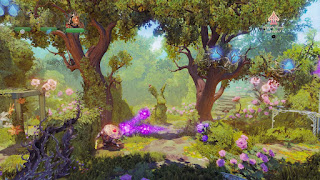 The Wizard can only create and hit enemies with his box; the Thief can hit with arrows, but they are not terribly powerful until she gets the elemental upgrade.  This leaves the Warrior, pretty much who I battled with each time.  Once he dies all I had to do was run another character to him and he re-spawned, then rinse and repeat.

The boss battles are hit and miss as well.  The first one in Pontius’ intro was actually fun as it was a mini puzzle; others were frustrating as they were just bash-a-thons.  Frankly, combat should have mirrored the puzzle designs instead of getting more physical.  As it stands the combat is the one weak point in the whole game. 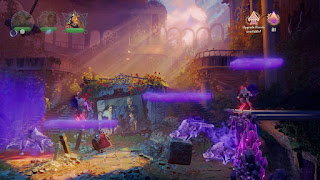 Overall, the lackluster combat does not detract at all from Trine 4 being a really fun and charming game as it is, thankfully, not that common.  The vast majority of the game is fun somewhat challenging puzzles in a beautiful gameworld framed by a silly but charming storyline.

The developer hit the magic balance of fun and challenging when designing Trine 4: The Nightmare Prince and the end result is a game that is frankly just fun to play.  In a world of AAA games and bigger, badder, louder it was a pleasure to run through the world of Trine in this game.

Trine 4: The Nightmare Prince is available right now for PC via Steam, Xbox One and PS4.