I take a lot of time to wander various areas of PAX East and found myself at the White Wizard booth where they were doing demo sessions of KAPOW! Billed as a Fast and Furious Buildable Dice Superhero Game this was instantly fun and engaging. I took a set home and spent many hours playing this with my family and came away more impressed each and every time we played. 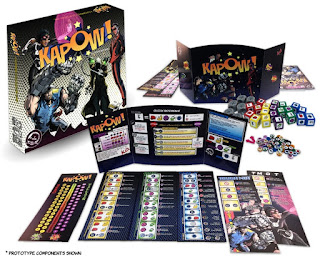 This is a superhero themed two player game that has each player choosing either a hero or villain character sheet or taking a generic role without custom character powers. The point of the game is to bring your opponent to zero hit points but there are many strategies leading there.

There are five dice types as well as a customizable action dice, the five dice cover Red Might, Yellow Energy, Purple Toughness, Green Defense, Blue X-Factor and White Wild dice. The action die starts blank but can be built up with any of the colored faces during gameplay.
Play starts with each side getting one of each dice (including an action dice) and rolling them all in private at the same time. There are included shields to block seeing what your opponent is doing and it is great fun wondering how the other player is reacting. The game board per player shows all the actions available and what the dice costs are. 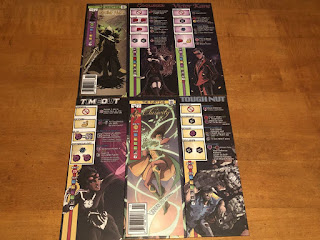 There are attack actions, defense and power up actions that require a varied amount of dice to perform.  Early on in the game there are big decisions to make as each player may choose to start attacking hard or choosing defense or power up actions or a mix of each.  Powering up is key as this allows extra dice to be obtained or faces for the action dice, more dice equals more actions possible.
It can seem overwhelming at first but after one playthrough everything clicks together beautifully and a give and take starts happening between each player.  Often I started down a defensive path and had to shift to attack or power up or vice versa.  The gameplay is so dynamic and varied that it makes every session feel unique.
The Hero and Villain sheets are a great modifier to the game as they add different hit point metrics as well as unique powers per character.  These characters add a unique strategy element per playthrough as some of the powers freeze actions, prevent attacks or make attacks indefensible but cost a lot of dice to perform. 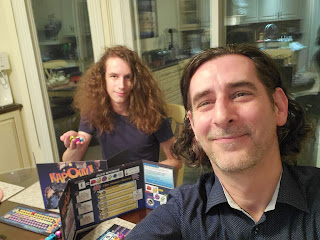 One of the best features of the game is the quick setup and relatively snappy game length. Playtime has averaged 15-45 minutes depending on how deep each player goes into their strategy. This makes KAPOW! A very easy game to drop into for a quick fun round of play.
This was a game created by a small team that had a very successful Kickstarter to launch it wider but in talking to one of the creators he really did not like that part of the business.  They recently partnered with White Wizard games and will see this and future expansions released through their wide distribution paths.
All of this is great as it leaves the team at 2 Ton Porcupine (Doug Hettrick, Carl Hettrick and Larry Bogucki) the opportunity to create more content for this game and future releases.  I can’t recommend checking out KAPOW! enough, I have played this with adults and teens and across the board a great time is had and there is always a request for one more round.