This year at PAX East was quite unusual as it coincided with the emerging spread of COVID-19 or the Coronavirus across the world.  While relative cases in Boston were very low at the time, the fear of travel caused some major players to reduce or cancel their presence outright but PAX East as a conference continued as planned.

The biggest omissions were Sony, who pulled out altogether, Microsoft who had a greatly reduced presence, and Square-Enix who still had a large booth presence but cancelled all panels and fan events.

This changed the overall dynamic of the show floor as there were still some big companies on the floor (Nintendo had an amazing Animal Crossing booth), but there was a much larger mid-market and Indie presence on the show floor.  Companies like Devolver, Daedalic, THQ Nordic and others had large populated booths with plenty of very interesting games.

Independent game companies had a huge showing at PAX East as well with the Indie Mega Booth seeming bigger than ever and expanded pockets of smaller companies from all over the world, like Brazil and Poland, were well represented.  Scattered all over the show floor was smaller companies, hardware vendors, hobby companies and storefronts.

Adding to the more community driven vibe was the extra room given to the whole expo floor by Sony leaving their huge footprint available.  The organizers really did a great job and spread out the show floor giving more room to some exhibitors and far more walking space which made the show floor feel full but not overly crowded.

On top of the great games on the show floor plenty was going on in the tabletop area with free Learn to Play events in the Magic the Gathering and Transformers TCG worlds.  Ongoing tournaments across these games and literally dozens of others happened throughout the entire conference, adding a truly great tabletop scene as always this year.

Panels like the Gearbox yearly show, the Storytime talk with Behemoth founder John Baez and Penny Arcade Q&A were big ticket items but plenty of smaller panels were available. These ranged from Gaming as a Family and examining the Bioshock series to Voice Acting and Booze Food and Games offering a ton to enjoy outside of the show floor.

The nights at PAX East always end with a main event and on the first day it was a night of video game concerts.  Acts like Video Game Pianist, MC Frontalot and Insaneintherain kept people chilling then dancing deep into the night.

As I wandered through the show floor and various panels, I was impressed with the varied experiences, big and small, available at a show like PAX East.

I beelined to the Final Fantasy VII stations first thing on Thursday, thinking I would not get a chance for a long while to play this before It releases in April, but the just released the demo publicly but it was still so worth checking out.

Frankly the demo was literally everything I wanted from the re-make, amazing new cutscenes, fantastic graphics, and a really great feeling new battle system.  The speedy combat, quick ability choices and character swapping made the demo play beautifully.

Some extra easy loot mechanics, amazing looking actions, quick feedback from the controls and a pervasive nostalgic but fresh vibe pervaded the demo. This is the game we remember but utilizing modern mechanics akin to the recent Resident Evil remakes. This is such a great renaissance for this older classics.

Prior to this, I was on the fence on getting this title simply because the original game was so iconic but a slog to get through. The systems were a thing of the time and far too many make work systems make FF VII classic (for me) terribly unenjoyable to replay.  This re-vamped engine, updated gameplay and mechanics were enough to convince me this is a must play again.

The first day at PAX East always starts with a breakfast hosted by Behemoth, which is a nice treat for all of us.  The second benefit of checking out the Behemoth space is that they were featuring their upcoming release which is a re-release of their classic Alien Hominid

Playing the game again was a nice experience as they greatly tweaked the difficulty spikes and added a ton of customizability to the players as well as some new gameplay tweaks like riding the agents.  Overall, this was a really fun experience that represents all the growth Behemoth has been through since the game first released many years ago.

Fans were swarming the Behemoth booth the entire show enjoying the re-make of their first big title and eating up their amazing shirts and assorted products.  Another thing Behemoth nails is its products, always great and as good as the official PAX merch.

This quirky small game caught my eye as a Cyberpunk bartending simulation. Focused on dialogue trees and mixology techniques to make the perfect cocktails to loosen tongues this was a unique experience for me.

The developer let me know that the game is constantly reacting to what happens in each interaction.  If you get someone drunk they remember in different ways and it shifts the responses throughout the experience.

What really impressed me about this game was the visual style and unapologetic quirkiness of the experience and it hooked many others, there was a constant line at the booth to check out this interesting title. 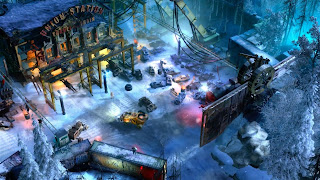 I am a Fig backer of this game but still really wanted a chance to play the newest build of Wasteland 3 at PAX East. The game is looking really great so far with some great mechanics such as driving, expanded dialogue options and some great sneaking and lock picking/hacking mechanics.

The combat was really fun to play through with a lot of tweaks to the classic Wasteland formula to take advantage of.  Tactics are key in these types of games and plenty of options were available in my playthrough of the demo.

There was a great stable of interesting characters and in particular the end boss was a chaotic psychopath that I managed to talk out of a fight and join my crew.  I didn’t think that was a possibility and was amused when it happened and gave me a good feeling for the full experience when Wasteland 3 is released in May.

Not a game but I had a chance to sit with this company to check out their gaming headset amplifiers which was quite interesting.  Their smaller device called the Fulla has decent power to augment your audio experience but the larger Hel amp pumps 1000mW into 32 ohms and sounded killer in my demo.

Not for the everyday gamer, but those like me who really appreciate deep audio could really appreciate the depth of sound both of these offer.  Was really impressed with these little devices and they look pretty badass too.

Every year Gearbox throws out a ton of cool information when they attend PAX East, and this year was no exception.  It started with a surprise wedding proposal (that brought the crowd to happy tears) and ended with a live reading of a scene from the next Borderlands 3 story DLC.

Everything in between was just as fun with looks at the Homeworld 3 and Mobile releases coming soon, additions to Risk of Rain 2 and Eli Roth himself coming out to talk the Borderlands movie adding some glitz to the panel.

The best bits though were around the next story DLC called Guns, Love, and Tentacles: The Marriage of Wainwright & Hammerlock which is such a cool progressive add-on to the Borderlands universe, plus it features Gaige one of my favorite Vault Hunters.

It was nice to see the Universe going in a cool direction with this next DLC and some tantalizing hints were dropped about the next chapter focusing around cowboys and dinosaurs and the 4th release which seems to be centered on the psycho Krieg.

Definitely a great first day at PAX East – there were some events that night called PreGamer which is all about local Indie developers and the yearly PokeCrawl pub crawl which always add to a fun experience in Boston.