I just need to get to the exit, dammit this was supposed to be an easy job now I am lost and all I can hear is the screams of the others. I left them, I closed the door and left them behind, but that…Thing…it was unstoppable.
All I was supposed to do was patrol the hallways and report any strange movements. Oh and monitor the containment levels. Those stupid machines, always glitching and Phil told me that it was normal for them to dip into red occasionally. Well are you happy Phil, you’re dead now..ARE YOU HAPPY!!!!! 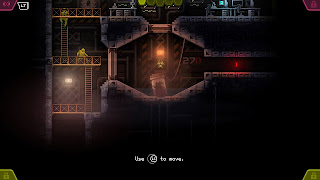 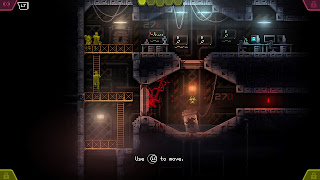 I saw the creature almost before I heard the alarms, a mass of tentacles, blood and too many mouths. So much teeth, and the sounds it made while it ate Phil…no I can’t think about that now, I HAVE TO GET OUT.
Just another hallway to the left and I think that is the way to the exits and freedom. Wait, wasn’t there a door here. Oh no, Oh God, the door is ripped off, IT’S HERE, but maybe if I run I can make it out. If I can just be lucky this one ti………… 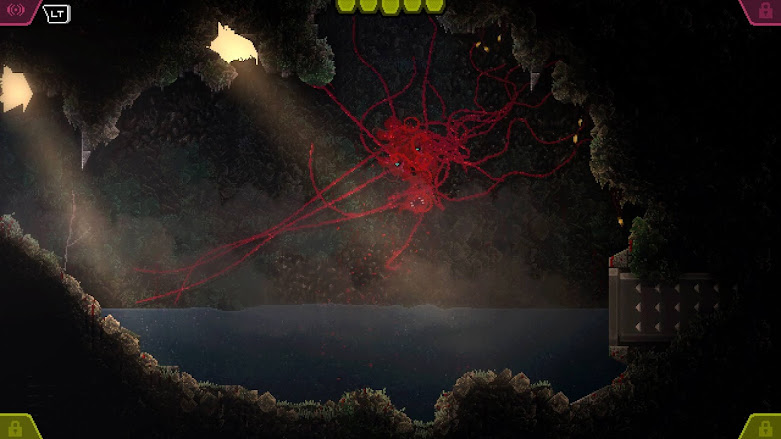 Carrion from Phobia Game Studio and publisher Devolver Digital is a reverse horror game played from the perspective of the rampaging creature. While I was playing through this excellent game I could not help but imagine the other side of the equation and how the victims reacted. The action is much more fun from the creatures side but it helped me develop a deeper overall narrative.
In Carrion we control the extraterrestrial creature that frees itself from containment and destroys everything in its path as it grows and tried to escape the facility. From the very first moments the movement is satisfying and dynamic. 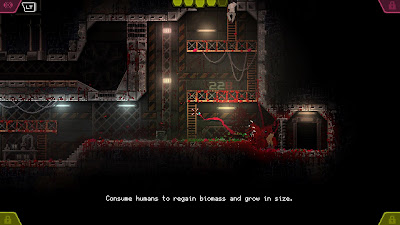 Tentacles reach out and grab surfaces, hallways are quickly traversed, vents used to take shortcuts and vertical movement is as easy as dashing through water. The game is designed as a Metroidvania, meaning certain areas are gated until upgrades are obtained.

As the levels are progressed new upgrades are obtained by getting into ruptured radioactive tubes (which is very satisfying by the way). Once a new skill is learned it is typically gated as well by how much biomass the creature has. To gain biomass hapless humans need to be killed and eaten. 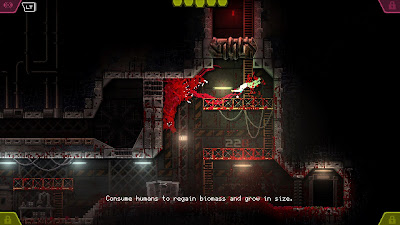 Like horror classics like The Thing this creature tears apart and devours its victims in a vicious mess of blood, albeit pixelated in this videogame version. Multiple tentacles lash out and grab victims and controller movements feed them into the gaping mouths of the vicious creature.

In a neat twist some abilities layer as the creature gets bigger, meaning sometimes biomass needs to be gained or lost in order to use certain skills to advance through the levels. Thankfully the gruesome but brilliant save system helps as some biomass is left behind in the save point and can be regained when needed.
The whole game is an elegant dance of movement and violence as the creature grows, explores and destroys everything in it’s path. Of course being a videogame the enemies change from helpless scientists to gun wielding guards and soldiers equipped with flamethrowers. These challenges add a layer of strategy to a game that could have just been a mindless tunnel crawl to a deeper experience. 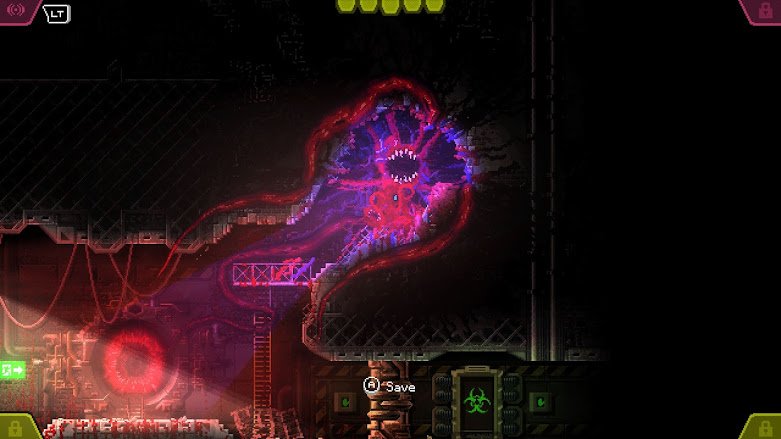 While the narrative side of this game is not exceptionally deep little touches such as lights breaking as the creature zips through them and doors smashing off their hinges add a great deal of atmosphere. There are also occasional segments from the perspective of a scientist who discovered the creature unravelling in a style of the game Another World that add a great diversion.
But the true visceral meat of the game is the satisfying and gruesome journey of the creature as it grows, consumes and escapes the facility. Framed as a horror themed Metroidvania the game is challenging enough to remain fun while prompting the player to keep trying one more section in the underground labyrinth.
Carrion is billed as a gruesomely satisfying Reverse Horror Game and I could not agree more. There is more depth than I expected and the action is gross yet wonderfully satisfying. Being the rampaging creature is fun and Carrion is well worth checking out. It is available right now on PC via Steam, Xbox One and Nintendo Switch.