More PAX East coverage – there are always tons of things to see and do at a PAX show and early on I had a chance to try a fantastic small game called Ape Out and a few other games that could be big hits once released.
Enjoy the continuing coverage I put out while attending the show for Blogcritics.org
PAX East 2017 Preview: Ape Out 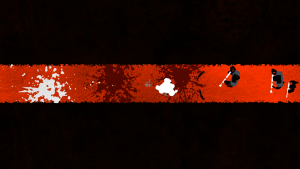 Sometimes a game comes out of nowhere and surprises you with it’s sheer playability, intelligent design and dynamic systems, at PAX East that game for me was Ape Out by Gabe Cuzzillo and published by Devolver Digital. I was walking through their booth looking at other games and Ape Out kept grabbing my attention. Featured a good deal of the time on their large screens it attracted constant crowds and people lining up to try it.  Ape Out is a simple game at face value but the graphical style, dynamic musical beats and striking animation made this a game I came back to multiple times despite the hundreds of other options on the show floor.
At it’s heart it is a frantic smash ‘em up about primal escape, rhythmic violence, and frenetic jazz that has you playing an Ape escaping from some sort of facility full of guards.  Each level is procedurally generated meaning you will never escape the same way and guards roam the halls trying to stop you. Thankfully you are a massive Ape and can grab, through and smash everyone you meet, take too much damage though and the level will end. The game does have numbered levels and if you fail on level 2 or 3 as an example you continue from the start of the level you died on, so at least the game does not push you right back to the start.
Read the rest of the Preview at Blogcritics.org
PAX East Preview: Elite Dangerous PlayStation 4 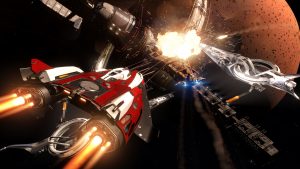 Elite Dangerous is not a new game; it has been around for a few years on PC and Xbox One, but the team at Frontier Developments is constantly evolving the game and their next big step is launching the title on the PlayStation 4 in line with the upcoming 2.3 update to the game.  At PAX East I had a chance to chat with the development team and find out what Elite Dangerous is all about, why update 2.3 is a big deal and what to expect when the PS4 version is launched.  What struck me most when chatting with the the team (both on the show floor and socially later at an event) is how passionate they are about their game and the community members that play it.  They have a genuine interest in delivering a better product each and every day and work with the community to tweak, change and add features with every version they release.
For those who have not experienced Elite Dangerous it is a space adventure, trading, and combat simulation video game set in an open world 1:1 scale galaxy modeled after the Milky Way and set thousands of years in the future.  You start the game with a small ship and the galaxy is yours to explore at your whim as you trade, battle, escort and try to thrive in the dynamic and complex world Frontier Developments has created.  The truly interesting thing about Elite Dangerous is how you can choose your path in a truly customized way. If all you want to do is be an intergalactic trader you can do that, if you want to be a bounty hunter that is an option as well, a space courier, feel free to go that path as well.  In Elite Dangerous there are so many options it can often feel overwhelming, but if you stay focused and work with the community resources a very compelling experience is at your disposal. Despite the game being quite complex the developer has expertly translated it to a console experience on the Xbox One (and soon PS4) as well as a hardcore Space Sim option with Joystick controls on the PC.
Read the rest of the preview on Blogcritics.org
PAX East 2017 Preview: Dauntless 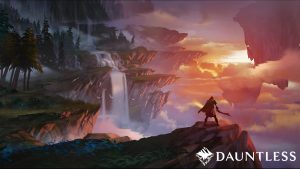 Dauntless made a big splash when it’s trailer debuted at the Video Game Awards but many were left wondering just what the game is all about.  I had a chance to visit the team and try out the game at PAX East and, while I still have some questions, I at least know that Dauntless is something fairly unique in the PC multiplayer shooter world.  At first I thought Dauntless was going to be like the ill fated Evolve (which also had huge pre-release buzz) but in fact it is more like Evolve meets Monster Hunter with a little Dark Souls mixed in. It was quite fun to play and has a visually striking look that inspired thousands of fans at the show to line up for their chance to check out the game.
Dauntless is a co-op action RPG set in a fantastical world were giant beasts called Behemoths have risen up and are terrorizing the world.  Your characters are called Slayers and you take contracts to destroy the Behemoths and save the world.  The game will be free to play, which always concerns me, but the developers were quick to assure me that the free to play mechanics will not hinder solo or non-paying players, instead they will add options and customizations to make the game more unique to your play style.  Regardless of how they go the game itself looks and plays great with a striking art style and quick gameplay.
Read the rest of the preview at Blogcritics.org
PAX East Preview: Hob 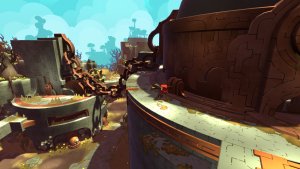 Runic games made a huge splash in the gaming industry when it released the original Torchlight game.  This team composed of some ex-blizzard devs seemed to go places Diablo would not, and fans came in droves to experience the game and it’s sequel Torchlight 2.  These were both excellent games and the world was expecting a third title in the series, instead the team at Runic surprised us with the announcement of Hob, an adventure game set in a changing dynamic world and featuring no dialogue or exposition.  This is a bold step for the team, but after my visit with Runic at PAX East, where I had a chance to try the game out, I can say Hob is another great experience from this talented group of developers.
Hob is set in a dynamic changing world that is influenced by your actions; as mentioned the team is presenting the story as a Wordless Narrative, meaning all lore and story will be communicated by the actions and set pieces as you explore the world.  It is a bold choice, especially after the narrative heavy experiences of Torchlight, but one that is executed in a very satisfying way.  At various times as you play through Hob the camera will pan out and show vistas, transforming bits of the world or autonomous creatures going about their business.  It reminded me of scenes in Starbreeze studio’s brilliant title Brothers where they would pause for a moment and enjoy the vistas.  In this age of instant gratification and screen filling explosions, it is a nice change of pace to just experience a game and scene instead of flowing through it without a thought.
Read the rest of the Preview at Blogcritics.org