The Outer Worlds, a Fallout-esque space romp by Obsidian and Private Division, is a truly inspiring video game that adds a lightness to a well-known genre. The game is silly and serious, heavy-handed but with a light touch at times, deep yet simple, and just plain fun. 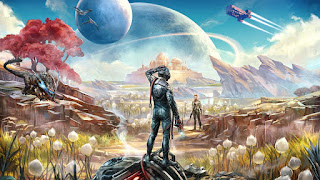 All the time I was playing The Outer Worlds I was struck by its apparent inspirations. There is a good deal of Fallout-inspired gameplay and nuance, not surprising since the same studios made the well-regarded but flawed Fallout: New Vegas. But it was the other bits that surprised me.

There is a healthy dollop of Mass Effect – if Mass Effect was a dirtier version of space exploration. The team mechanics and vibe of the outfits and environments has that flair of that title. There is also a robotic teammate full of interesting interactions that veer far more silly than Legion and ADA, and the ship AI is far snarkier than EDI.

I can’t help but think that Obsidian was also a huge fan of the TV show Firefly, with the game’s many similarities to that iconic show. These include the “gee-whiz” enthusiastic female mechanic, a priest with a militant past, and a ship that screams Serenity’s design right down to the kitchen setup.

Last, and this may just be me, but I swear Deadwood also inspired the developers’ design for many of their western-themed towns. Nelson in Fallbrook reminds me of E.B. Farnum down to the fact he calls people hoopleheads and is very punchable.

All of these varied inspirations roll together and form an incredibly cohesive and frankly stunning experience that is quite surprising as Obsidian has been making isometric games for the last number of years.  With their pedigree it was in their wheelhouse to make this type of game, but the sheer quality of The Outer Worlds is astounding.

The premise of the game involves a future where corporations rule known space and are run by an intergalactic board. The corporations don’t care about the little guy (of course), so any lack of profit means whole planets could be shut down. This leads to a desolate setting for the game.

The character I played in The Outer Worlds was a colonist sent out as part of an exploration force to settle new worlds, but the ship was lost and all hands were stuck in Cryo sleep for 70 years. A mad scientist named Phineas Welles thaws my character out and sends her on a mission to right some wrongs and get more chemicals to save the rest of the colonists.

Of course things are not always as they seem, but this setup is a good way to have another “person out of time” character around to disrupt the status quo. And boy did I ever do that, throughout the entirety of The Outer Worlds.

As a newly thawed out explorer I was plunked in the middle of corporate-funded despair across a number of planets, moons, bases and stations. At each of these there are a number of interesting characters that, of course, have problems they will trust a random stranger with. Sometimes they accepted my help while acknowledging, with a bit of a fourth-wall-breaking nod, that it is a bit ridiculous to do so.

These missions included saving trapped people, sabotaging other businesses, taking down enemy marauders, and searching for a holy book.  The quests are pretty much what I have come to expect from games of this type. Some had pretty big stakes.

Much like the Nuke in Megaton from Fallout 3 there are a few decisions that can be made that devastate certain portions of the settlements. These choices come up almost suddenly at times and can have far-reaching effects. It is nice to see these “big” choices but they are not quite as dramatic about that option to nuke a whole settlement.

The quests are often very interesting and require a good amount of back-and-forth through the worlds, so thankfully load times are pretty great and fast travel is extensive and easy to use. Once a location is discovered it can generally be travelled to from anywhere outside of combat situations, which is incredibly great. The developer also added interior fast travel spots, which I could kiss them for.

Gameplay is very similar to the Fallout series, with again some sprinkles of Mass Effect. The gunplay is quite fun, with up to four weapons equipable at once. There are all sorts of weapons, from pistols, shotguns and grenade launchers to melee weapons such as sabres, axes and spears. There is also a continual mission branch to find various special “science” weapons that are experimental and have cool effects like shrinking, mind control and freezing.

Skills obtained while leveling up add perks and advantages, and companions (you can have two on missions, and six in total are discoverable) have special abilities that can be triggered during combat with short cinematics. This adds that bit of Mass Effect flair and some quick tactics during combat. I will confess I often forgot about these special abilities, but once used they were very effective.

My character also had a Tactical Time Dilation skill that is very much like the V.A.T.S. system in Fallout. Time slows when the skill is triggered and I was able to aim to weak spots to stagger, cripple or weaken body parts. The TTD is fairly short in comparison with V.A.T.S. but came in handy for some tough battles.

Armor is as varied, with light, medium and heavy variants of armor and helmets that have various perks – and disadvantages at times. The armor system in particular helped steer my character towards a certain archetype. The armor can help with certain skills and can be swapped at will. I often kept certain items with persuade, hack or lockpick bonuses in inventory to help with tricky situations.

All weapons and armor can also be modded a certain number of times to add perks, bonuses and skill enhancements. These are really cool and in the case of weapons also add some nice visual effects. What I really liked is that the damage type could be changed as well (add plasma, n-ray or other effects). This switched up my weapon choices quite a bit which I liked a lot.

The characters encountered during the course of the game are all interesting and varied. The NPCs all have their unique motivations that I really enjoyed experiencing, but the companions captured most of my interest. Companions are handled much better than typically in the Fallout series, and I actually cared about them and wanted to explore their back stories and side quests.

The best by far is Parvati, who is so similar to Kaylee Frye from Firefly it made me smile every time I spoke to her. The Priest (Vicar Max), hardnosed sawbones Ellie, and continually drunk hunter Nyoka were my next batch of go-to partners. Felix and SAM I had little to no interest in, but they all can’t be winners.

The richness of the characters, both the NPCs and companions, is what kept drawing me back to The Outer Worlds. The storylines, dialogue, side missions, and little narrative touches captivated me from the first few moments, truly magical and engaging to experience.

I would be remiss if I did not mention the visuals. The design, graphical flourishes, bright palette and grungy locales all make this one of the more striking games in recent memory. Seen in 4k with all settings at max, The Outer Worlds is as beautiful as it is fun, with crazy amounts of detail and little touches that make the universe feel alive.

Despite my overwhelmingly positive experiences, the game has a few niggling flaws. There are some serious bugs, especially on Phineas Welles’ Asteroid Lab – every time I tried to go to the inventory menu it hard crashed to desktop. I really hope this gets patched out as it happened randomly in other locations as well. There was also a graphical glitch when looking at characters in the menu – they are all greyed out and basically silhouettes.

I also found the game’s combat, frankly, far too easy which made me regret choosing Normal difficulty. I think I died only once or twice in my whole adventure (outside of specifically designed challenging encounters) once I amassed some good weapons. I think the game balancing could be tweaked because Normal is essentially Easy mode.

These little issues are far outpaced by the sheer quality and enjoyment I find in every corner of The Outer Worlds. The characters feel real, the world building is effective, and the narrative is corny at times but brings me into a Farscape or Firefly-style milieu and I just couldn’t get enough of that.

Obsidian has created an instant classic with this game. The whole time I was playing I just wanted more and more from the game and it kept delivering. It’s truly a great game to simply enjoy for the sake of enjoying great content. The Outer Worlds is available right now for PC via the Epic Store, Xbox One and PlayStation 4.