By the final day of PAX East I only had a handful of appointments to check out games left and was looking to wind down from the hectic experience PAX can be.  For whatever reason the last few games were not terribly enjoyable with the exception of Subdivision Infinity DX.

From the moment I started playing this game I could not help but think this is a poor man’s Dante in a budget Devil May Cry game.  The lead character Desmond, who made a deal with Lucifer and lost, is so mind blowingly generic it almost hurt.

This is a third person action game with a very slow pace, running is slow, attacks are slow, enemies are slow.  I felt like if the developer were to just speed everything up 50% the game would be a great deal more enjoyable.

The core concept of the game has Desmond running about solving easy puzzles and battling demons across multiple locals.  He has a number of abilities to spice up attacks and ultimate powers to change into a demon form (sound familiar?) to trash the enemies around him.

The graphics were surprisingly solid and there are some good designs and concepts here, but there is nothing original about the gameplay or scenario and that made the demo a slog to get through.  I can see kernels of great ideas here but the team at Layopi games is sticking too close to the DMC model and not making something unique.

It is a shame because they are a small team and what they created is technically sound and has some potential if they could find their own niche.  As it stands this game just seems so similar to the Devil May Cry series but with none of it’s charm, speed and ingenuity.

Devil’s Hunt is launching later in 2019 on PC, PlayStation 4, and Xbox One. 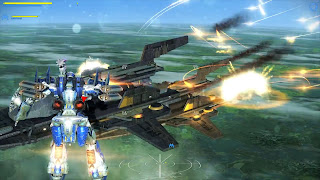 As it was midway through the last day of PAX East the people at the booth seemed a little tired and I was left mostly alone to figure out this giant mech game and I came away confused and not really interested in what I saw.

I love mechs as much as the next guy but what I had a chance to play in War Tech Fighters was clunky and not terribly polished at this point.  The world seemed well fleshed out but the experience I had, and it could be because I came into the game cold, was boring and lifeless. 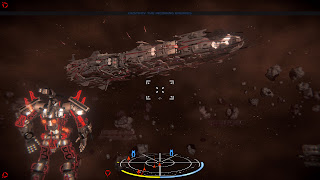 In the game there are three types of War Techs – Hawk, Lynx or Rhino class (light, balanced, and heavy) with a ton of customizable parts which could probably spice up the experience.  I used pre-existing loadouts and while I enjoyed some of the visual elements, the overall look and feel was muted and slightly boring.

Controls were confusing and not precise and I just found very little appealing in the game.  I am hoping I just had a bad experience and the team at Drakkar Dev have made a far more interesting game than I saw.

War Tech Fighters is available now for PC and set to launch in Q2 of this year for PlayStation 4, Xbox One and Nintendo Switch. 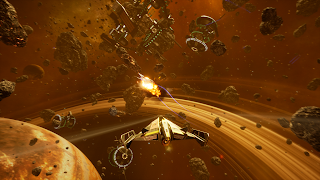 This game was the one shining light on my last couple of demos at PAX East.  Set in the fringes of the galaxy this action filled space sim was fun to play and has an art style that I really enjoyed.

Playing the role of Sgt. Jed Riddle (really?) Subdivision Infinity DX has an extensive single player campaign that kicks off when Riddle is contracted to investigate a mining facility.  In the few missions I played there was a decent variety of objectives from recon, collecting data and straight up dogfights in space.

This is an arcade style space sim so controls were very accessible on a gamepad with weapon switching, acceleration and targeting enemies occurring very easily.  The combat is fast and furious with baddies hounding me as I tried to chase them down around stations and space debris. 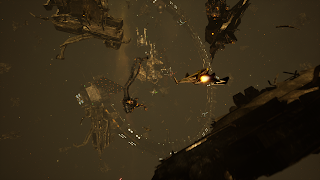 The developer promises that the full game will have a wide variety of story missions offering many types of experiences.  There will also be a lot of optional content such as bounties, mining asteroids for rare minerals, unlocking new ships, and crafting increasingly powerful upgrades.

This was a game I would truly like to see more off and look forward to its release in the next couple of months for PC, Nintendo Switch, PlayStation 4 and Xbox One platforms.