Every year at PAX East there are a number of events before the conference begins or after the expo hall closes at 6pm. The Boston Convention and Exhibition Center stays open till 11pm and offers concerts and live D&D sessions for all to enjoy. Outside of the BCEC there are hosted parties and gaming events that bring the community together in different ways.

This year I was able to attend a few of those. To start off PAX there is the annual PreGamer event hosted in Laugh Boston. For late-night fun I checked out the Acer Predator After-Party and the Acquisitions Incorporated D&D session hosted by Penny Arcade’s own Mike “Gabriel” Krahulik.

Every year during PAX East on Friday night from 9pm till the wee hours of the morning Predator, Intel and PC Gamer host an incredible party at a Boston nightclub. This year was better than ever, at the Royale venue.

The event is free to the public and always delivers a night of swag, gaming and incredible music for everyone who attends. The lineups are long but this is always an incredible time and well worth the wait.

This year they were featuring a Pros versus Joes CS: GO tournament with members of the public able to challenge professional players from Team Envy. The matches were hilarious, with the crowd cheering every time the Joes scored a kill, but to no one’s surprise the Pros won consistently. 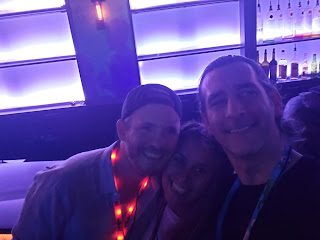 Tons of hardware was set up in side rooms letting us try out various high-end gaming hardware, including the Predator Helios 700, Predator Triton 500 and Predator Helios 300 laptops as well as the frankly amazing Predator X27 gaming monitor. I also checked out their Predator Thronos Air gaming chair which was an insane setup that has to be seen to be believed.

Once all the gaming was done Grammy-winning DJ Audien took to the stage for an amazing late-night set that got the entire room jumping and dancing until the bar turned on the house lights at the end of the night. It was great to feel the vibe of the entire room as we all danced and celebrated this great night together as a community.

What is truly enjoyable at this event every year is how much this gaming community gets together to have fun in a very different atmosphere than the show floor. People of all walks of life are chatting, dancing and gaming together in a social setting and it was just lovely to be a part of that.

Playcrafting, NYC’s largest community of game developers, brings an amazing event to Boston every year the night before PAX East starts. Focusing exclusively on local Boston and surrounding area developers, this is a great way to kick off PAX East.

Hosted in the Laugh Boston club next to BCEC, it offers some free food, some great music, and dozens of indie developers showcasing their newest games. Many many gaming stations are available with current games so people can have a quick round of Fortnite or battle each other in Street Fighter.

What I like best about this event is how focused it is. A lot of these games are also being shown at PAX East but there they’ll be surrounded by thousands of other games, with events going on and with much larger crowds. At PreGamer I was able to check out games with time to spare and chat with the developers.

I saw a lot of interesting games, but frankly the one I enjoyed the most was a tabletop game called 30 Seconds to Live. It’s a 1V1 zombie game where one side is the survivor and the other the zombies. What I enjoyed was the simple pick-up-and-play mechanics, and the great mechanics overall. I tried a playthrough and really enjoyed myself even though I lost (it was a close match).

PreGamer is a great event for the local gaming scene in Boston and I’m glad it kicks off PAX East every year. The folks I chatted with where all having a great time and it was obvious the developers where proud to show off their hard work to the people attending. 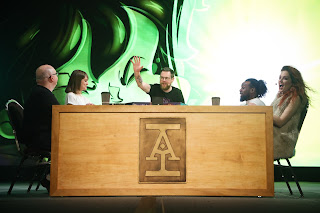 This was a special one. Every year there is a live Acquisitions Incorporated game, which is the D&D campaign centered on the creators of Penny Arcade’s characters. Guest players and DMs are always on hand but this time Mike Krahulik, the PA co-founder and artist, was hosting the campaign.

The atmosphere was amazing, and Mike centered the campaign around the idea of Baby Yoda from The Mandalorian, except in this case it was Baby Jim, a child variant of his own insanely popular Jim Darkmagic character.

He purposely made the campaign ludicrously difficult, with a horde of enemies and an Elder Black Dragon explicitly designed to have Baby Jim save the day akin to Baby Yoda saving Mando in the show. It was hilarious to watch, and more importantly, very cool to see the chemistry and camaraderie of the players on stage. 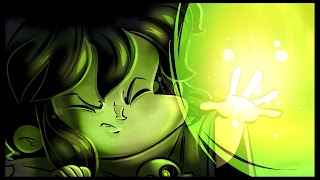 Joining Mike was his co-founder Jerry Holkins as well as Morgan Webb, Xavier Woods and Elyssa Grant in this frankly hilarious session. The icing on the cake was all the effects and images Mike and the Penny Arcade team created, which were broadcast behind the players as he was running the campaign.

Another big surprise was that Mike launched live on stage the new Baby Jim character, and even had t-shirts made that would be available the next day on the show floor. Jerry was not even aware of it and it was a great reveal.

I have not been a huge follower of the Acquisition Inc. games and the associated C-Team narratives but having watched them live on stage a couple of times I think I will add them to my podcast library and catch up on all the shenanigans. It’s a great side venture for the PA family and one that obviously brings lots of joy to their fans.