Around the third day of PAX East you can see the general fatigue starting to hit everyone, but it is also the busiest day as it is Saturday and a full day of panels and after-hours events are available. I was worn down from the fun events of the day before so had a more laid-back day, but still saw plenty of amazing things.

Games like Foregone, Disintegration and Genshin Impact were the highlights but I also did a quick round of Magic the Gathering and checked out Bethesda Game Days again for another round of Doom Eternal and some food.

A lot of wandering around the Tabletop area and some souvenir snags happened, and I had a little more time to chat with the vendors. A great third day ended with the Acquisitions Incorporated Live show hosted by Mike Krahulik. It was a ton of fun watching them play live with direct crowd feedback. 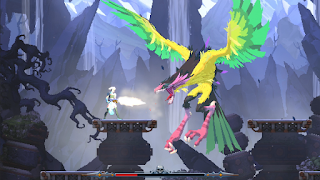 This striking game first caught my eye at The Montreal International Games Summit and I was excited to try it out at PAX East especially as it coincided with its release to early access. Initially this looked like a game that was essentially a Dead Cells clone (not a bad thing), but having played it quite a bit now I can tell you it’s that and much more.

Like Dead Cells, Foregone is a Roguelite game where death happens often but the hero is revived with consequences. Unlike Dead Cells, though, Foregone is more narrative-rich, with story beats, dialogue and twists that brought me quickly into its world. 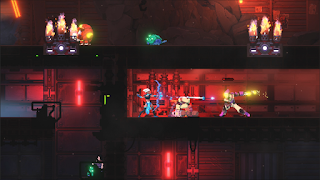 At a high level, Foregone is a game set after a devastating war, with the world besieged by an all-corrupting force known as the Harrow. The character we play is an elite soldier called an Arbiter. She can collect an arsenal of powerful weapons and upgradeable skills which are used to destroy the Harrow.

Playing through the game is fast and fluid, with loot dropping at a satisfying pace. There are numerous types of equipable items, from main and side weapons to armour and trinkets. In a nice twist, the weapons are not lost when death occurs, so they can still be salvaged, upgraded or equipped after a respawn. 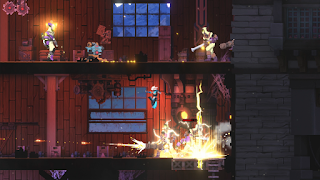 The levels are all hand-crafted pixel creations that look striking, but they did make replaying the levels a little less satisfying than in the aforementioned Dead Cells. The enemies are set to explore their areas, though, so there is some variance in how they are encountered. Visually the game is striking, with plenty of environment and enemy types to spice up the action.

Overall I am having a great time with Foregone. It’s colorful, fast and challenging, and the loot dynamic is satisfying to explore with upgrades and power tweaks available to add a ton of variety.

Lately games like this in Early Access are something I’ve been really enjoying. It’s already a solid title and I’m excited to see what developer Big Blue Bubble has in store while it moves closer to full release status. Foregone is available right now on the Epic Games Store.

Somehow I had never heard of this game from developer V1 Interactive, but after playing it at PAX East I wanted more right away. Set in a near future, this game features a truly unique premise of a pilot commanding a powerful armed GravCycle supported by a small team of Outlaws as they battle those who would decimate the remaining population.

The world of Disintegration seems very interesting as described by the developer. As the Earth nears total ruin, a new process called Integration is invented where the human brain is removed and surgically encased in a robotic armature. This was supposed to be a temporary measure but some of the Integrated saw this new form as the future of humanity. They formed a group called the Rayonne, and war erupted as they started to hunt down the remains of humanity and integrate them. The main character of the single-player focus of Disintegration is Romer Shoal, an expert Gravcycle pilot who is Integrated but refuses to give up on humanity and fights back against the Rayonne. The story snippets we saw seemed exciting, but what we were able to play was the fast-paced Multiplayer mode.

In Multiplayer there are many themed Pilots and Outlaws to choose from that focus on certain functions: think tanks, healers, defense. Each group is composed of the playable pilot and controllable ground forces. This is a really cool setup as everyone has support as they play through the matches. 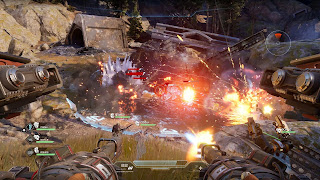 The game mode was control point, and I could direct my ground forces to a location that they would attack or defend on their own as I fought off other pilots. Each pilot had special attacks and abilities that were easy to learn and use.

The game was incredibly enjoyable, and as I was playing I could tell this would be a hit competitively, as the pilots they have created are varied and interesting. I was only able to play a couple of rounds but I had a blast trying out the game.

Disintegration is currently looking at a release date some time in Q2 of 2020 on Steam with technical Betas happening on and off till release. This is one to keep an eye on because of the interesting premise, compelling pilots and sheer fun gameplay mechanics. 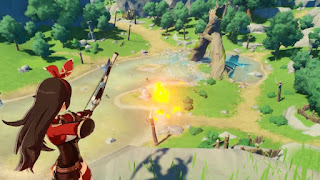 One of the more surprising games I checked out while at PAX East was Genshin Impact from developer miHoYo. This is a Japanese open world action RPG that blew me away with its art style, gameplay mechanics, design and sheer ambition.

Envisioned as a Free to Play experience launching later this year on PC, PS4 and Mobile, this game is a very intriguing look at the open world third person RPG genre. First off, the developer ensured that anything viewable in the distance is reachable; I tested this out in my extended playthrough by looking at a mountain and eventually climbing it as I explored the world. 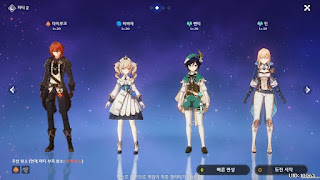 This will be a story-based experience and the key hook, for me at least, was the roster of unique characters to choose from, each with their own unique look and moveset. The game’s combat and world mechanics are set around elemental types: fire, water, electricity and others. Each character has a certain elemental trait, and fast switching between characters in the party allows for some layered elemental actions.

Water and electricity or ice and water were two variations I tried out to very interesting effect. I was able to electrocute groups of enemies in water or freeze a portion of a lake to cross more easily. It was incredibly interesting to switch between characters and try out different tactics. 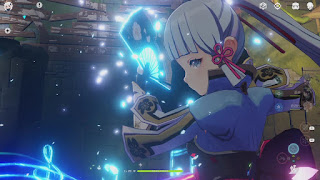 Different weapon types, armours, items and crafting will all be a big part of the game but I was not able to dive into a lot of the side features because of a lack of hands-on time. But what I did see was mechanically impressive and quite fun.

What impressed me the most was the sheer beauty of the world in Genshin Impact and the varied and interesting characters forming my party. Each of them was remarkably animated and uniquely represented on screen. It was like playing an anime and I was blown away from the start.

The only thing I am wary about is the Free to Play format. Everything else – the characters, world, art style and mechanics – was amazing and I am looking forward to learn more about Genshin Impact, which is set to release this year. More details on how it will be released should be coming soon.